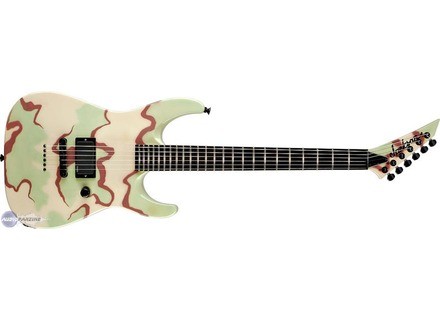 The guitar is really a no frills guitar. It's meant to be a performance guitar for metal, and it shows. The first thing you notice with this guitar is that it has a pretty unique paint job. The camo is done nicely, and I didn't notice any real smears or anything. The frets themselves were level, and that's always a good thing. However, the ends were a touch sharp. If this were my personal guitar, I would have taken a file to them and rounded them off a touch. The nut could also have been opened up a touch for the heavier gauge strings that were put on this guitar.

First of all, the guitar resonated nicely. I find that these guitars all seem to resonate a bit better than some of the other Jacksons out there. The EMG 81 in the bridge was a perfect match for this. It had the cut that the 81 is famous for, but it never got super thin. It was very direct, and it had a great high gain sound. However, clean sounds sucked. It also lacked versatility since it's a single humbucker guitar. I'm a big fan of neck pickups, so that was a bit of a turn off for me, personally.

These guitars are pretty nice guitars, and if you like the one humbucker thing, you'll most likely enjoy this guitar. It was put together fairly well, but be sure look for potential nut and fretwork issues that might occur sometimes. The most important thing was that it sounded great plugged in.
Did you find this review helpful?yesno
»

The handle is excellent, but everyone does not love, it is very close to a Les Paul, so quite round, I know that there are guitarists that can put off, even some that have real difficulties with this type of form. I personally have started on a LP I always do so this bothers me not at all, even for very planes (very) upset.
The guitar is light despite mahogany, it is far from just an LP! Also there is only one microphone.
Housing for easy cell opening: it is not required to take the screwdriver to change it: very good.
Yes we get a very good sound, especially saturated EMG81 course requires the value for money is very impressive.

We can get a decent clean sound carefree kind usual arpeggio (heavy) metal heads, it is clear that this is not too shovel made to play pink floyd we get along well.
Suddenly not necessarily versatile, not funk with but hey, is this being asked?
No No No.

It happens that I have another dinky, the DKMGT, alder body Maple bolt-on neck Rosewood keys: they do not sound the same despite the same microphone (who said that sounded like EMG81 on all guitars? ?)

Mahogany is really his taf and adds a good layer of warmth in the bass and a kind of twinkle in high mids, very nice. With a good layer drive, has the same settings on the amp it has a more velvety than DKMGT its less "hard" (though I still like it I said).

Attention was not the "big heat" of a LP, this heat is not intrusive on metal bodies as the LP and so much better (weight of the guitar requires).

Not connected, this guitar resonates more than DKMGT, it has a very good sound "empty" feel it vibrates well, it reflects the vibrations of the strings.

Ebony keys are really nice and the guitar is very light.

The EMG81 does its job and is magnified by mahogany, it really is a good guitar for very wicked plans rhythm or solo Moreover, EMG81 can do anything.
Personally I see it more in rhythm because of its "fleshy" she distilled.
For me it happens all the heads on which I can connect: JVM410H, 5150, single correct (eg I do not like DKMGT on the front ... but DK6 going great)
A very good 9 simple and effective weapon of war!

It sounds great tuned down, I purchased the standard rising 13/66, really nickel but it is not necessarily my usual cup of tea, I'm 10/52 drop C # or C and I love !

That makes two weeks that I have but I really like and yet I have other more expensive guitars .. (LP, Lag, RR5, DKMGT)
I've qques records (micro) with and I am very satisfied.
The ratio Q / P is absolutely excellent, I would do without this choice problem (for mounting a EMG85 and / or other tuning / pulling ..)
If you are looking grattte to rock or heavier .... jump on it you will not regret it. This still scratching at the specs of ESP .... follow my eyes .....
Taking sufficient agreement even if it does not upscale Mecas.
The only negative I can think of is the same as on my other dinky, namely jack connection that crachotte after qques years, but good in the worst case is 7 euros ...
Did you find this review helpful?yesno
»

Countdown's review (This content has been automatically translated from French)" Scratches not too good ... ployvalente!"

Jackson Christian Olde Wolbers DK6
4
Signature guitar in Jackson, guitarist Christian Olde Wolbers of Fear Factory (and also bassist of the same group just before!).
Made in 2005 in Japan and more ... made for 2 years it seems (at least, say most sold new!)
The body is mahogany, the neck (24 cases) as well (but I also read that he was the model for red maple, called "red blue pearl"!), The ebony fingerboard, no mark (the I find most beautiful effect).
A single microphone, the famous EMG81 in bridge course, and one knob, one volume! Could not be more simple ...
Head "traditional stock" Jackson reversed ... with the signing of the cache trussroad COW!


Characteristics of the "red blue pearl" ... I just do not see why it would be different from mine (the black)

The neck is relatively thin, typical Jackson so to say.
It is fast, one would easily walk. It is enjoyable to play, and the highs are easily accessible.
The guitar is well balanced, with an average weight / lightweight (3.6 kg!).

With this kind of micro (and config!), This is not done to the bagpipe.
This guitar is totally oriented metal.
Sound is pretty sharp, pretty potato what!
In his clear, it will not attack "maliciously" under penalty cruncher a tad ... but anyway, you do not buy that kind of guitar to play on the clean channel! I repeat a few words what the previous opinion, but for a good cause ... to confirm what his words!

I seem to get the "burst", but I'm just a beginner confirmed! These are just my humble impressions, hey hey!

I use it for over a year!
I already tried a bunch scratch, especially oriented big sound (a few others too, eh!). Other Jackson (DK2M) Ltd and H250 MH400, ESP horizon, Epi LP and Gibson Flying V for example.
But ultimately, I confess to having bought primarily for its looks! I find it beautiful (after, it's a matter of taste, right?). The ebony fingerboard without markers makes the guitar completely black. I just put a button knob chrome skull (see photos), which comes out very well!
The ratio Q / P is pretty good, I think! I think it exceeded the 600 new or 650 euros (to be confirmed!)

Currently she is for sale as to test other models, there is no alternative. I'm not the type to be tested 10 minutes in a shop (even if I do, of course), but nothing beats the possession of an instrument to test at home, in rehearsals, on his gear on that of friends ...
But, if I could keep it, I will do ... first for its looks, I repeat, but also because it is fun to play ...

ToonZilla's review (This content has been automatically translated from French)

- So the round, sweet, down to bne is rgal, the handle is fine, the string action is low plutt.
- Access in acute plutt is good, it's not an SG but not need to be contortionist to grip the cargo 24me.
- Ergonomics is Strat-type is no problem in terms of balance, it is pluttlgre
- For sound: it's easy, it is the EMG-81, there is only knob volume so it's not too taken plutt head and basic.

- I play a lot of type mtal metallica & co. Therefore the EMG-81 bridge in suits me perfectly.
- I jou scratches with this on a peavey bandit 112, especially on a mesa boogie 30Watts, and: adpotte!
- The sound is quite clear lens but watch it saturates easily so you have to play with the volume knob (is that the so-must use it a bit: D). This is not a register prdilection. That's when we go to large saturations we feel better now the BTE microphone has a hell of potato, may be missing some serious but a lil rglage on the amp and parat no more. The sound is a little cold (EMG requires) but personally I like, anyway ultra prcis: not a drooling, no frills. There is still a blast but a little lightweight noise-gate and the case is RULES.
- Given the versatility of the BTE pluttrduite, the sounds are not varied trs is not going to take to play the Jazz (but that's not what being asked). For cons: you fans mtal Precipitation Occurred!

(I put 8 for the versatility of the BTE Reduces the registry but mtal well saturated it's all good!)

- I jou several times over the shop on the corner.
- I love the look with the head reverse (all in black, camouflage espce not ugly!) Trs simple, unadorned look and sound too!
- Well I have not done, but yep I'm trying to test a lot of MODELS for my next purchase and I confess that I retain the l.
- It is found in France 699 adj correct as I find quality price ratio given the quality of the BTE, but by mail order in Germany or elsewhere (I will not mention by name: D) I saw 579, that the price: you throw it.
- I am looking for a guitar typ mtal and I admit that among all the ones I tested this one has caught my attention.
Did you find this review helpful?yesno
»