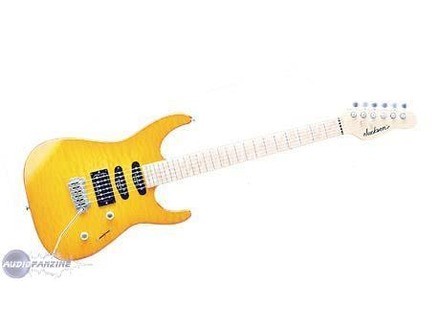 Jackson PC3 Phil Collen
3
Phil Collen has always been a strong supporter of Jackson throughout his career. Considering that he's fairly popular, it's only natural he'd have a signature model. For a short time, they also released some budget models of his famous signature guitar. Here are the specs:

The guitar was decent. I like the wood combination, and it looked nice. However, the frets were kinda haggard. I would recommend taking this to a luthier and having the frets nicely leveled and crowned. That should fix 90% of the problems with any of these guitars. The final problem would be the floyd rose that Jackson uses. They're not that great. I really like replacing them with an original floyd rose. That'll help bring this guitar somewhat on par with the original Phil Collen model that's made in the USA.

The guitar didn't sound too bad. It resonated nicely, and it looked killer. However, the Duncan Design pickups killed it for me. They sounded muddy and undefined. I recommend replacing them with something else such as the Duncan JB or Distortion for the bridge and maybe some Hot Rails for the neck and middle. That would really given this guitar an entirely new dimension of awesomeness if you did that. It would also bring it another step closer to the USA production model.

These guitars aren't too bad, but I find they're harder to come across. I don't think they're made anymore for whatever reason. The wood combination is actually my favorite wood combo, so it gets points for that. However, the Jackson licensed floyd and iffy fretwork drag it down a few notches. Just a bit of a warning for those who might be buying blind...