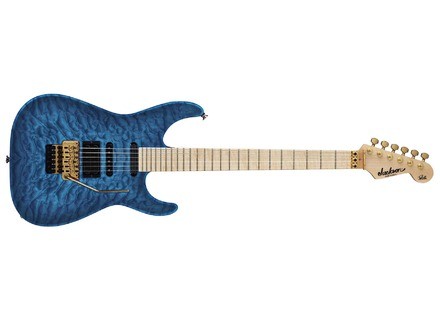 I have been a huge def leppard fan for a long time. And my love for Phil finally out muscled my dislike for super strats. The first thing to note about this guitar is that it is heavier than you think it will be and the neck is huge. We're talking Fender baseball bat thick. I have small hands, and while I never get tired on this neck, I have a hard time with it during chords. It's not a deal breaker. Just a note for guys with smaller hands. The vibe, despite the look of the guitar is that it plays like an old 60's strat with a floyd.

I usually play mine through a number of rack effects and a Splawn Street Rod. It's kind of my hair metal setup I guess you could say. I rarely play cleans with this guitar. It's pretty strictly for Def Leppard covers only. The Super 3 pickup is very very thick. Lots of mids. The center pickup sound odd by itself and is more meant to be used in conjunction with the other two. The sustainer is well...awesome. It does exactly what it's supposed to. You can hold notes forever and make some crazy soundscapes. It might be my favorite feature on a guitar...ever.

The guitar is not incredibly comfortable to play but I guess it is what it is. I still enjoy playing it. There is honestly nothing else like it, that's for sure. It nails down the Def Leppard vibe perfectly. It's a pricey guitar but well made and there isn't any skimping on features. If you like a beefy fender style and you want to get that mid heavy thick 80's lead sound, this would be your dream guitar for sure. The sustainer alone is worth the price.
Did you find this review helpful?yesno
»

Jackson PC1 Phil Collen
5
This is the old style Jackson PC1 that they released. There was actually a very early one of these, but the one I'll be referring to has the slightly rounder Fender style headstock. The reason was due to patent issues as Fender had the rights to the headstock at the time. The guitar features a mahogany body with a quilted maple top, a maple neck, 24 frets, dot inlays, an original floyd rose, HSS configuration, one volume, one tone, a five way switch and two switches for the sustainer.

The quilt on this was very awesome. It totally popped out, and it was super deep. It had this 3D look to it that lots of high quality PRS guitars seem to have. The neck on this is very fat, so keep that in mind. If you're a fan of thinner necks, you might want to look elsewhere. The frets on this were in great condition considering its age, and the maple fretboard was wearing quite nicely. I like the worn maple fretboard look, personally. On top of that, the guitar had an original floyd rose which I happen to be a big fan of.

This guitar has the DiMarzio Super 3 in the bridge with the DiMarzio HS2 in the middle and Sustainer in the neck. The Super 3 is like a super fat Super Distortion. It has tons of mids and some cut back treble. This guitar is really meant for brighter amps such as Marshalls and the such, and that's no real surprise as he tends to play the old JMP-1s. The HS2 in the middle is kinda useless, and I was never a big fan of that. However, the Sustainer is very fun to play around with. To explain everything would take some time, but you're able to use it almost like an ebow or something.

I find these older ones to be a bit more consistent than the current ones for whatever reason. They just seem to speak to me a bit more, which is somewhat of a shame because I prefer the newer style headstocks. If you find one at a good price, I recommend looking at potentially buying it.
Did you find this review helpful?yesno
»

Jackson PC1 Phil Collen
4
Phil Collen of Def Leppard has been playing these unique Jacksons for a very long time and they have pretty much become a staple in the Jackson line up. They have a bunch of cool features that give them a unique feel and tone compared to the typical Jackson. This guitar has a mahogany body with a quilted maple top. The neck is a super fat bolt on neck made from maple. The fretboard is maple as well and has Jacksons compound radius design. The neck has 24 jumbo frets as well. The pickups are Dimarzio in 2 positions with a Super 3 in the bridge and an HS2 in the middle position. The neck pickup is a Sustainer pickup that can also serve as a normal humbucker. The bridge is a double locking Original Floyd Rose. There are a bit more controls than usual. There is a 5 position blade switch. There is a master volume and a master tone and an intensity control for the sustainer. The mini switches turn on the sustainer and switch it from normal mode to harmonic mode.

This guitar may look like a typical 80s shred guitar but it sure doesnt feel like one. Phil Collen like super thick necks and this guitar has a super thick neck. Even though the neck is super thick it is not as thick as Phil's personal models which is crazy. The maple neck and fretboard feel pretty smooth. The compound radius helps with playability. Near the headstock on the low end the radius is 12 inches which means the fretboard is slightly more curved up there to make playing chord shapes more comfortable. Near the high end the radius is 16 inches which lets you get a nice smooth action on the strings where you would most likely be soloing. The fretboard has no inlays so it has a very clean look. This may be a problem for some players but there are always sidedots to look at.

This guitar has a very 80s tone. Anyone who has heard Def Leppard will recognize the tone. The Super 3 is a modified Dimarzio Super Distortion but with more mid range. With this midrange you can really cut through the 80s effects and have a good tone. The sustainer pickup is pretty cool. It has an active design. You can make notes sustain forever with this pickup. The sustain has two modes. It has a normal sustain mode and the 2nd mode is like a harmonic sustain mode which gives you cool feedback sounds. The 3rd knob on the guitar controls the intensity of the sustain effect. The pickup also sounds pretty decent as a normal humbucker. It has more of a strat sound even though it is a humbucker. The mahogany body on the guitar gives it a thick tone overall. The huge neck also helps with the tone. The guitar comes setup with very heavy strings. Collen personally uses 13s. This guitar is all about getting a heavy tone.

Although this guitar looks like a normal shred guitar it is very different. It is more built for tone than easy playing. The huge neck makes it a bit hard to play but the mass helps with tone. If you are a fan of Phil Collen you might like this guitar but you must play it first. It has a very deceptive look to it. It does not play like a normal shred guitar. It feels more like a 50s Les Paul than a Jackson.
Did you find this review helpful?yesno
»