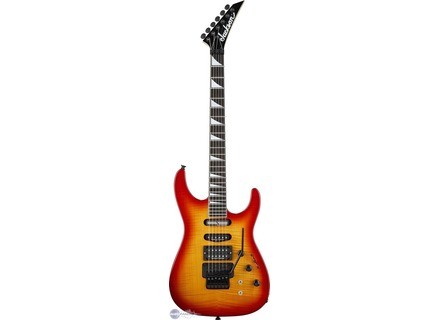 DK2S Dinky (Before 2006), STC-Shaped Guitar from Jackson in the Pro series.

All user reviews for the Jackson DK2S Dinky (Before 2006)

Jackson DK2S Dinky (Before 2006)
4
The sustainer is one of the really cool additions to this model, and it's really what separates it from all the rest of the DK2 series. Aside from the sustainer, it's really the same model. The guitar has the following specs:

This one was pretty good in terms of how it was built. I have two major gripes with this model, however. The first one is that the flame top on this is just a veneer. It's only for looks and adds no tonal properties to this at all. That really cheapens things up, in my opinion. However, for the price, it's understandable. The other one is that the bridge on this is really not that great. The screws can strip easily, the fine tuners' threads are too coarse, and it just feels bad. If you decide to keep this model, I highly recommend replacing it with an original floyd rose. Not only will it last longer and feel better, I honestly believe that it'll sound better.

The guitar has a very unique sustainer in the neck which I'll get to later. First, the bridge is a JB. The JB is pretty famous considering it's been the #1 high gain pickup for the past 30 or so odd years. It's been used on everything from blues to death metal recordings, and it can really do all styles. However, it can also be a bit bright and loose for some people, so keep that in mind. The STK-1 in the middle is pretty cool, but I only use the middle for split positions. I can't give much info there. The sustainic in the neck is what sets this guitar apart from everything else, and the sustainer can really lead to some awesome tones. For an idea as to how effectively you can use this, listen to Steve Vai's "Building the Church."

I like this model a bit better than the other DK2 models thanks to it being more versatile. The sustainer really adds another dimension of tone that a lot of other guitars don't seem to utilize for whatever reason. If you decide to get one, I recommend buying used as you'll get a much better deal than if you were to buy brand new.
Did you find this review helpful?yesno

aRok's review (This content has been automatically translated from French)

Jackson DK2S Dinky (Before 2006)
5
Made in Japan, 24 jumbo frets, Duncan pickups (a single, a double and the famous Sustainer

. It also has a Floyd Rose, three buttons and a rglages slecteur 5 positions. The quality is there, it's good stuff, despite the weight lgrement surprising beginners.

Once in hand, there is a fun game great, the handle is really enjoyable, fun game is to go.

J'enlve just one point for this quality could be better Clean and the weight that the Premire drang minutes (by comparison, it is a little heavier than a Start US).

Although sr, it is discovering with the distortion, the heavy rhythmic gniales are, the faster game is beautiful, this guitar is a finger

rve APRS jou have the Sustainer, very practical, but whose use is more complex dj is going on in the clear. By switching my amp, I was afraid of dj rsultat but ... No! Clear sounds are really beautiful, but not trs slammin the versatility of this guitar is proof! Although sr, no its a beautiful Fender, but it's even trs well!

I bought it less than two months and I am hooked! I had to choose this guitar pretty quickly, but again I think I would take it

The report is also qualitprix (for + / - 800 is your exact trs good!).
Did you find this review helpful?yesno

Stigmates's review (This content has been automatically translated from French)

Jackson DK2S Dinky (Before 2006)
4
I did not even me but a colleague has made the acquisition.
Ms. Jackson if it is that I have heard they are too nationalistic, gender thou apelles telling them that their guitar is poorly done, poorly rgl of origin, that must reponce several places because the strings break and they'll buy a guitar rpondent Franaise, feared hairy.

Sound a little too synthetic, but the major advantage of this is the sustainer, which makes a clear east to scratch solo, a fuze, a whining, has enjoyed.

3 modes so when the sustainer and the "on" position. Normal to hear the serious frquence arsene in every sense, a shuffled mix of normal and 3rd mode: "harmonic", you will never hear your guitar to sound as acute.

I would say it's a scratch but use SPECIFICATIONS worth of being essay.

J'enlve a point to sound too synthetic, but that's all.

So metalleu solo Yabon sustainer except jackson dinky
Arachis finish, its my taste too synthetic

I wonder if there are other guitars with this kind of inovation over Mount ... if anyone heard of it I'm interested