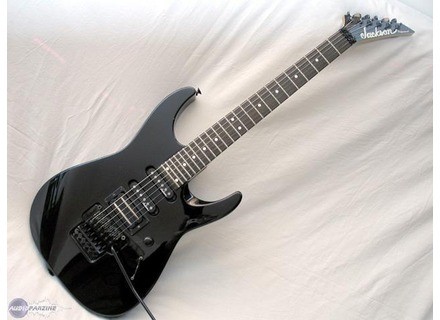 Fusion Custom, STC-Shaped Guitar from Jackson in the Professional series.

Jackson Fusion Custom
4
This is yet another low end Jackson made overseas. The guitar has the following specs:

The floyd rose on this thing is a Jackson floyd rose. They're not the greatest at staying in tune and kinda suck tone out of the guitar because of the cheaper metal that they're made out of. If you're going to keep this guitar, I think replacing the floyd would be a good idea. I like the original floyd the best. Aside from that, the guitar wasn't too bad. About average for what to expect with these.

This one had replacement pickups, so I'll be going on those. The bridge was a Duncan JB. This gave it some nice bite, and it works for nearly any style you can think of. It can do blues, rock, metal and any other genre you can think of. The middle and neck pickups were Hot Rails. These gave the guitar a super fat sound that works awesome for lead tones. You can get some crazy sick legato going on. I think the Hot Rails in the middle is a bit too overpowering, but it all depends on your tastes.

These can be somewhat hard to find, but they're not too terrible. There are some better Jacksons out there that are made over in Japan, but if you're a fan of these, it's worth checking out. Just be sure to at least replace the pickups. They really give this guitar new life.
Did you find this review helpful?yesno
»

CotesDarmor's review (This content has been automatically translated from French)

The neck is super enjoyable to play, a round of Shredder in short, the frets are Jumbo idalie on this type of handle. Access in acute condition is OK to have long fingers. The weight of the guitar is good, lightweight, one does not feel it after several hours of scratching. The ergonomics of the body is like Ibanez / Start with a chamfer the rear. A single micro scratches on this but not least: an EMG 81 that fits perfectly the essence of the guitar (Linden) which gives a relatively rich in its harmonic and quite warm. Distortion in the sound is powerful, and swell prcis pulse. You will not, if you are looking for this type of sensation. In his clear, this is not a must in this config, a touch of chorus or rverbe is Necessary for making it all warm. Normal, since the microphone is positioned in the bridge and thus reinforces the treble!

With the scraper, I play rock sturdy and quite mtal, hard & Cie, no worries, it provides with a Peavey Classic 30, the sound is just as hot as it is needed. In clear sound, I risk myself slowly, although the rendering arpges with a touch of chorus, gives her an enjoyable trs ear (normal microphone is rich in harmonics!)

Ah! I forgot, vacuum, it makes a good projection (which is auspicious General for once branch!)

This scraper is excellent in many ways, a real rgal for the distortion of obsessive like me, long sustain die roaring riffs, but happiness. The handle is a highway with no speed limit. B flat? This must be one or two, version customizes one microphone stand (EMG81) but it is a single or double micro to the handle, would ultimately does not hurt. Deuce, I have other guitars for other styles of music. But if you do that and the less be a fan of punk, rock, mtal & etc ... this may be limited. A good scratching Japanese 90s (one of glory, whose guitars are enough research ...). Street price opportunity between 400 and 500 saw the equipment allocated (Pink Floyd, mechanical and micro Schaller EMG81)
Did you find this review helpful?yesno
»