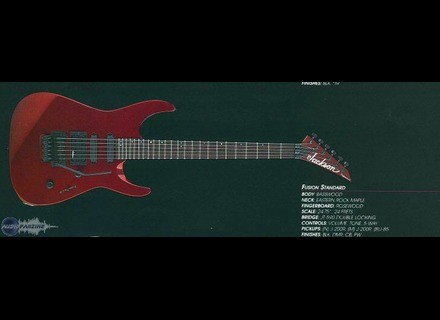 Fusion Standard, STC-Shaped Guitar from Jackson in the Professional series.

Jackson Fusion Standard
4
This is yet another low end Jackson made overseas. The guitar has the following specs:

This guitar had an original floyd rose swapped into it. I much prefer these to the stock Jackson floyds as they hold tune better and generally sound better. The cheaper pot metal of the lower end Jackson floyds tends to suck tone. The frets weren't too bad on this, but the neck joint had a slight gap in it that could potentially affect tone.

This guitar had aftermarket pickups swapped into it, so I'll be going on the tone based on those. There was a DiMarzio Evo in the bridge with two FS-1 single coils in the neck and middle. The Evo in the bridge gave this guitar some serious bite. It really cuts through the mix, but it might be a bit too bright for some people. It's very high output, and you can hear every little mistake you make, so it might not be for everyone. The FS-1 pickups are pretty cool in that they give a unique, powerful kinda single coil tone going on. There was a noticeable volume difference going from the neck to the bridge, so that might bother some.

If you start modding these guitars, there is some potential in them. However, I think you can do better if you spend a bit more money and buy something that has alder or mahogany. I'm a fan of basswood on my Ibanez guitars, but it just feels wrong to have a basswood Jackson for whatever reason. Maybe I'm too traditional.

You must love the sleeves flat. if this is the case, you will be delighted!
The guitar is made for soloists, shredders of all kinds. Access to acute perfect handle fast and slippery.
Balanced guitar.

The original pickups are already good or very good. But I love the Sh-12 Screaming Demon, then he came on the guitar side easel ...
Guitar and Rock and Metal oriented sounds (or more) less comfortable in clean sounds, some say ... From my side, with two microphones origin (neck, middle) and Sh-12 (bridge), I have a good range of sounds (from light to deep and round distos that vibrate) Everything is a matter of taste you tell me ...

Long played above -7 / 8-years in the group and at home. Put a little away today because Flyod has aged badly (broken and seized) So I'm changing everything floyd side to give it a second life as lutherie level, it has not moved to a bit! Attention to the damn floyd when changing strings, it quickly becomes a headache (but valid for all guitars floyd!)
This is a typical guitar course but it's still a good instrument midrange and especially a sure 90's in Jackson (violin, shape, sleeve).
Did you find this review helpful?yesno
»

Jackson Fusion Standard
5
made in japan I think at that time, jackson floyd doing his job, 24.5 sleeve pitch ideal for short fingers, plus it is late, it's a guitar where small jigs will feel like in poisssons water, the pickups are fabulous, a abération to change them, they are at the top and give its character to the guitar.

this is a guitar that suits me perfectly, a guitar in my size, "smallest" than average, or lighter, linden wood is light, ergonomic top, do you get a good sound easy??
badinate you sir!
it is also impressive, how can output sound so HUGE, powerful, warm, clear, full, guitar from as small?
I tried many charvel jackson, some good competition and this merger is possessed I assure you.

connected anywhere with it sounds easy and diabolical precision, the metal is very large field of its prédiliection, where it reigns in mistress.

guitar a rare value for money, good starts to sputter the selector, it costs nothing to change here, the metal comes out alone on this guitar and in a truly splendid ..... Another small downside vibrato seems more brittle at the fine tuners that take a large clearance with age.
I never the revendrais!

Jackson Fusion Standard
5
Guitar made in Korea
mechanical oil bath
24 frets
all microphones are double-array coils
the microphones and the middle of the handle are dual single coil format
5 position switch, volume, tonalitbr /> Pink Floyd
round rather late
has the short scale Gibson

Should have full styles of music, the microphones have a very hollow sound of the strips is
its fat neck pickup has a very beautiful and clear sound paul
bridge pickup high output and low dla fine with acute dig mediums (slides)
insensitive to noise .......
it lacks a position parallel range between neck pickup and the middle one for the real crystal clear sound funky a stratum ....... pti a soldering iron shot left and c ....

I have been using a bunch of years at least 8 years and I keep it again!!
if you have big paws watch out because it is a "small" with a short scale guitar
I try a lot of models before and after, gibson, fender, prs, lag, Gaudin, ibanez

very good report quality price no regrets I would do without hesitation that choice .....
his name is melting and it's true we can do all styles from jazz
to grind ..... versatile modern sound
it's not a guitar for rockabilly !!!!!!!!!
If you have suggested OCCAZ cheap and it is nikel go ahead !!!!!!!!!!!!!

Did you find this review helpful?yesno
»
Read the 5 user reviews on the Jackson Fusion Standard »