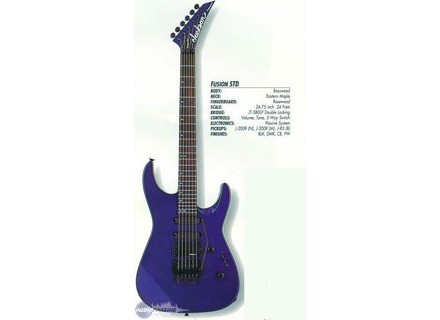 Fusion STD, STC-Shaped Guitar from Jackson in the Professional series.

Jackson Fusion STD
3
This is the basic Fusion guitar that was made by the overseas shops in Japan. The guitar's main selling point is its 24.75'' scale. The guitar has a basswood body with a bolt-on maple neck and a rosewood fretboard, 24 extra jumbo frets with offset dot inlays, a licensed Jackson floyd rose, an HSS configuration with no pickguard (direct mounted except for the ring on the bridge), one volume, one tone and a five way switch.

The guitar is put together decently. These are some of the lower end models that the Japanese shop put out, so there could be some issues with the frets and neck joints. On this particular model, the frets were pretty decent, but the neck joint had a decent gap to it. This could harm tone, potentially. The neck itself felt nice, and that's always a huge plus. The radius is nice enough to where you can lower the action without worrying about fretting out when you start doing those huge bends. The floyd itself should probably be replaced with something of higher quality as these aren't that great.

The guitar's stock pickups aren't that good. The bridge pickup is muddy, and it's very undefined. I find that these stock bridge pickups usually don't sound that great for whatever reason. They just seem to lack that clarity that so many other quality pickups have. The neck and middle pickups were similar to these Hot Rails ripoffs. They're single coil humbuckers, and they're powerfu. But again, they're also muddy sounding. If you're going to keep this guitar, I recommend replacing these with something that sounds good. Since this is basswood, something from the DiMarzio line should be perfect.

I'm a fan of the shorter scale super strats as they add this cool thickness to the sound. However, the STD model is one you probably want to avoid. They don't seem to resonate as much and tend to have some issues that other higher end models don't. They also lack some of the cooler features that the other ones have.
Did you find this review helpful?yesno
»