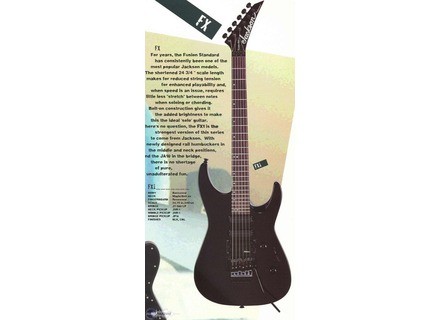 FX1 Fusion, STC-Shaped Guitar from Jackson in the Professional series.

Jackson FX1 Fusion
4
For those who don't know, the Fusion guitars have a shorter scale than the normal Soloists. This guitar has a basswood body with a maple bolt-on neck and rosewood fretboard, 24 jumbo frets, offset dot inlays, a licensed floyd rose, HSS configuration, one volume, one tone and a five way switch. Biggest difference between this and the EX is that this has direct mounted pickups.

This one was a pretty solid guitar. The frets were nicely crowned, which was a major plus. The edges were a touch sharp, but it wasn't anything to really be concerned about as they were better than some of the other guitars to come out of this time period. The neck joint was nice and tight, so no issues there. The floyd on this is pretty trash, though. You should really replace this with something like the original floyd rose or another high quality floyd. It'll improve both tone and tuning stability.

The stock pickups in this are pretty awful. The bridge is fairly muffled and undefined. It doesn't have that clarity that higher quality pickups have. The singles in the neck and middle were average, but they didn't have that single coil quality that I really love. They work all right on cleans, but since I'm a metal guitarist, I don't put that much effort into clean tones to begin with. To be honest, I'm not a ig fan of these basswood Jackson guitars. I like my basswood Ibanez guitars, but it just seems wrong on Jacksons. I'm more of a traditionalist when it comes to what woods guitars are made out of, I guess.

The FX1 is probably one of my favorite models out of these because it's clean looking and has direct mounted pickups (aside from the ring on the bridge). The short scale is really cool on these, and although it can get cramped in the higher end, I feel it helps thicken up the overall tone a bit.
Did you find this review helpful?yesno
»