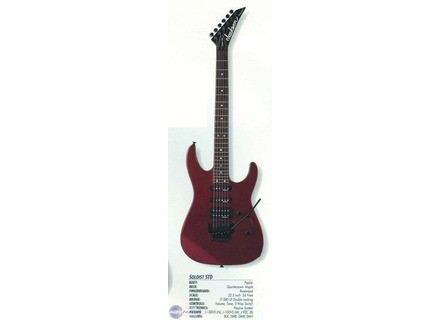 Soloist STD, STC-Shaped Guitar from Jackson in the Professional series.

Jackson Soloist STD
4
This was the standard version of the Soloist that the Japanese shops released. It is a bit downgraded from the other models. The guitar features a poplar body, a maple neck-thru design with a rosewood fretboard, dot inlays, 24 extra jumbo frets, no binding, HSS design, a Jackson licensed bridge, a volume pot, a tone pot and a five way switch.

These guitars aren't the best in terms of how they're put together. On the one hand, you have a neck-thru design. That means you don't have to deal with the issue of sloppy neck pockets that can occur. However, the frets weren't perfectly level. I was fretting out on certain notes because of this. The guitar lacks the features that the others have since it's the budget model, too. Gone are the ebony and sharkfin inlays, as well as the binding. The floyd on this is also pretty trashy, so I recommend replacing that if you decide to keep this guitar. An original floyd rose should drop right in, I believe.

The stock pickups in this were horrendous. First of all, the guitar didn't really resonate that much. I'm not sure if that was due to the wood choice or what, but for whatever reason, it just seemed to sound dead. Keep in mind, I'm not a fan of poplar, so that's coming into play as well. The bridge was very bright and sounded extremely thin. It didn't seem to work nicely for anything. The neck and middle singe coils were noisy, and they lacked any clarity and woodyness that so many other single coils have. They worked alright for clean tones, but I don't put much effort into clean tones as I'm a metal player at heart.

The STD is the bottom of the barrel model when it comes to the MIJ Soloists. As a result, I recommend checking out the fretwork thoroughly. That's where these guitars will experience the most problems. That said, you won't have to worry about the neck joint issues since these are neck-thru models.
Did you find this review helpful?yesno
»