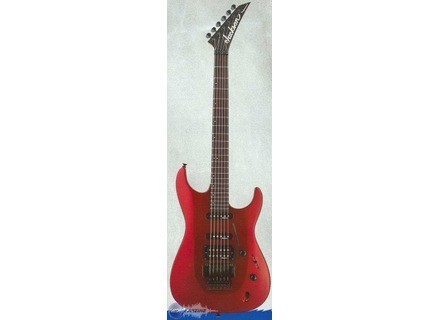 Stealth EX, STC-Shaped Guitar from Jackson in the Professional series.

All user reviews for the Jackson Stealth EX

Jackson Stealth EX
4
The basswood bodies that were used on these were always what caused people to turn towards something else in the Jackson lineup. The guitar has the following specs:

You don't see the Stealths that often, and I can kinda see why. The body is unique looking, but I find the body to not look quite as nice as the other body styles that Jackson offers. The dot inlays also made it kinda cheap looking compared to some of the sharkfin model versions. The fretwork was decent, but there was a low fret or two that started to show itself once I adjusted the action. The ends were good, though. The floyd on this isn't that great, and if you're going to keep this model, I recommend replacing it with something a little more high quality than what's already in here.

The stock pickups in this were pretty bad. They lacked clarity, and they were muddy. The bridge was pretty dark sounding, even with the tone knob maxed, and I believe a lot of that is thanks to the basswood. Basswood is actually a pretty dark and midrange heavy wood which can sometimes lead itself to be dark at times thanks to the onslaught of midrange. The pickup just didn't seem to mesh with it. The neck and middle pickups were decent, but they're only really good for clean tones. The distorted tones didn't sound too great, and they lacked the dynamics that I find in other higher quality single coils.

A pickup swap is needed for this guitar if you plan on keeping it. They're built decently, but be sure to check for any potential neck pocket gaps and fretwork issues that may occur. You can find these pretty cheap on the used market, so no issues regarding trying to get a good deal on these.
Did you find this review helpful?yesno
Cookies help us improve performance, enhance user experience and deliver our services. By using our services, you agree to our use of cookies. Find out more.