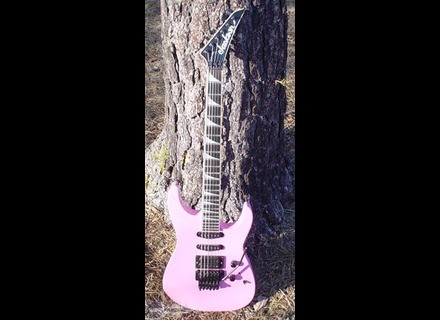 Jackson Soloist Custom
4
The Soloist Customs were some of the few custom models that came out of Jackson during this time. You could special order certain things back then, and it was a lot more personal than today's mass produced line. The guitar, however, is pretty much the same as any other Soloist. It features an alder body with a maple neck-thru neck and an ebony fretboard, 24 extra jumbo frets, sharkfin inlays, an original floyd rose, HSS configuration, one volume, one tone and a five way switch.

These old school pastel colors like to fade quite a bit, and this one had some fading going on. It's just the nature of the color itself, and there's not much you can do to prevent that aside from keeping it in its case all the time. The bridge on this is the original floyd rose, which is one of the best out there. On top of that, it's the superior older model that was made from when the molds weren't ridiculously worn. They tend to be super springy, responsive and have a great overall feel to them. The frets on this were in very good condition with little wear, so no issues there. The binding was also looking pretty good on this.

The guitar had a DiMarzio D-Sonic in the bridge with a DiMarzio Air Norton S in the neck and HS3 in the middle. The D-Sonic is a bit of a noisy pickup. However, it's quite big and clear sounding with the bar towards the neck. For lower tunings, you might prefer the bar towards the bridge, but it all depends on what tone you're going for exactly. It split nicely with the HS3, and you could get some cool clean sounds going on with that. The HS3 is a bit low output, however. The Air Norton S in the neck position was absolutely heaven in this thing. It got some awesome warm, fat and thick lead tones going on.

These are some of the more special Jacksons that they released back in the day. If you happen to own one of these, consider yourself lucky. They seem to have taken more care and attention when building them. However, most that you'll find will be a bit worn, so expect to do some potential fretwork and other maintenance.
Did you find this review helpful?yesno
»