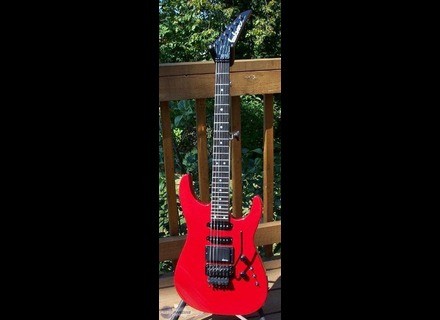 Jackson Soloist Student
4
Back in the day, there were two main Soloists made. The one was the Custom and the other was the Student. Both of these guitars were high quality, USA guitars, and the differences were very minor. The main difference was that the Student had a rosewood board, dot inlays and no binding, but there were configurations that negated this as you could have these in many different configurations. The guitar has the following specs:

This guitar didn't have too much wear for how old it was. The guitar had a few knicks here and there, but the overall wear was pretty much on par with what you'd expect from a regularly gigged guitar. The fretboard on this was actually very dark, and I wouldn't be surprised if the previous owner dyed it at one point in time. It wasn't coming off my fingers when I played, so I can't say for sure if it was dyed or not. The floyd on this was starting to show some wear, and there was some rust on the allen heads. The small string locks in the saddles were also a bit cracked. Other than that, the guitar was very well put together, and it was one hell of a shredder.

This had a Seymour Duncan Custom installed in the bridge with two Quarter Pounders in the neck and middle. The Custom happens to be my favorite Seymour Duncan pickup. It's very similar to the JB, but you have a little more bottom end and tightness to it. Depending on the guitar, it might be a touch bright, but it's generally not too bad. The Quarter Pounder pickups are quite something. They're very high output, and they're also quite noisy. That's the one thing I really didn't care about with these pickups. They're so noisy that I never really got used to them, and while they sounded fairly good, I found myself having to switch to the bridge real quick whenever I was done soloing. Not a fan of the cleans with these, either.

These are the real secret gems in the Jackson lineup. A lot of people think that the Student series are lower end guitars, and they're really not. They're high quality guitars that are very solid. If you happen to run across one of them, at least pick it up and play it. You might be surprised.
Did you find this review helpful?yesno
»