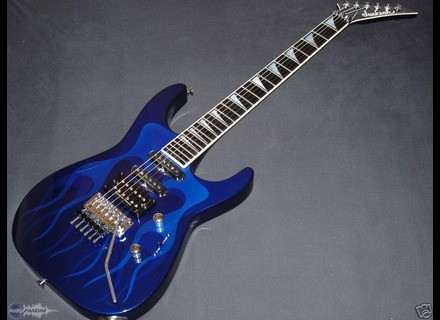 Jackson USA Custom Shop SL1 Soloist Mike Shannon
5
This is a guitar that was custom built by Mike Shannon. For those that don't know, he's the master builder over at Jackson and has been with the company for as lon gas I can remember. If you're wanting the ultimate in what Jackson has to offer, it'll be this guitar. The guitar features an alder body, a neck-thru maple neck with an ebony fretboard, 24 extra jumbo frets, sharkfin inlays, an original floyd rose, HSS configuration, one volume, one tone and a five way switch.

The thing that stood out about this was the super sick finish. It kinda reminded me of the old school Doug Aldrich guitars that he used to have. It had that retro flame paint job on it, and it was absolutely flawless. There were no runs, pinholes in the finish or anything that could even be considered a flaw. The binding was done properly on this, and that's always a good sign. The frets on this were also perfect in pretty much every way. The crown was just right, and the ends were beveled in such a way that they were pleasant to play on. You didn't slice up your hand all the time when moving up and down the fretboard with these.

The guitar had a JB in the bridge and two Hot Stacks in the neck and middle. The JB in the bridge was very nice in this, albeit a touch bright for my liking. This is truly an 80s guitar in every way, including the tone. Moving the tone knob down a bit helped tame that treble, but it was still a very bright and cutting tone. Great for 80s but lacking for modern metal. The Hot Stacks in the neck and middle were awesome for soloing on, and they got some pretty cool clean tones, but I found that they didn't sound quite the same in the in-between position when compared to a normal single coil.

The guitar is great, and if you have ever had the pleasure of playing a guitar that Mike Shannon built, you'll know what all the hype is about. He truly is a master at his craft. These guitars aren't really worth what they're going for thanks to Suhr and Anderson taking over the guitar market, but they're definitely worth checking out if you ever get the chance.
Did you find this review helpful?yesno
»