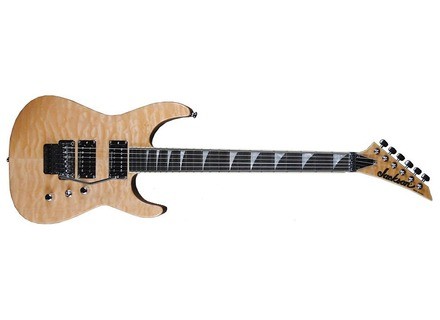 Jackson USA SL2H-MAHQ Soloist
5
This is the quilted maple version of the Jackson Soloist. It has much the same specs as the last SL2H-MAH, but instead of the standard flame top, they used a nice, high quality piece of quilted maple instead. Aside from that, it's roughly the same as the last model. The guitar features a mahogany body with a quilted maple top, a mahogany neck-thru design, an ebony fretboard with 24 extra jumbo frets, sharkfin inlays, an original floyd rose locking tremolo, two humbuckers, one volume, one tone and a three way switch.

The guitar had a very stunning quilted maple top on it. It looked very 3D, and it a great depth to it. The clear on it really helped the maple top pop, as well. The neck on this was pretty much like any other Soloist in that it's fairly thin, but it's far from being the thinnest neck out there. The compound radius on this is very nice. When you chord, it feels like any regular, old school guitar. However, it doesn't fret out like crazy on the higher frets once you start bending with low action. The frets on this were in great shape, and there was hardly any wear at all. The ends were beveled properly, and they didn't slice your hands when moving up and down the neck. On top of that, the guitar had an original floyd rose which happens to be my favorite bridge.

This guitar actually had EMGs swapped into it, and it was one metal monster. It had an 81 in the bridge and an 85 in the neck. The 81 in the bridge was absolutely perfect for this guitar. It was super tight, and the harmonics jumped out like crazy. However, it wasn't super thin like 81s can sometimes be. The mahogany really helped thicken everything up and give it some strong low end. It's great for your super tight death metal riffing. The 85 in the neck was awesome for leads. You could get some really fat, full sounding legato lines without any issues at all. The one thing worth noting is that these pickups aren't great for music other than metal, but they do metal great.

The guitar is awesome, and I highly recommend people who like Soloists to check out this guitar. It's my favorite of the Soloist series, and I wish they would make more models like these. At the very least, I'd like to see more mahogany winged/bodied Jacksons out there instead of the standard alder. It would really help give them some more versatility than the basica alder/maple/ebony combo that they seem to enjoy.
Did you find this review helpful?yesno
»