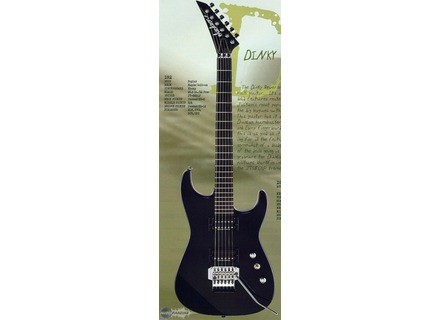 Dinky DR2, STC-Shaped Guitar from Jackson in the USA series.

Jackson Dinky DR2
4
This is one of the few American Jacksons that I've played that actually has a poplar body instead of the normal alder or mahogany body. It's also slightly different from the normal Dinky that you tend to see all over the place today. The guitar features a poplar body, a maple neck with an ebony fretboard, 22 frets with no inlays, a licensed floyd rose bridge, two humbuckers, one volume, one tone and a three way switch.

The first thing I should mention about this guitar is that it has a licensed floyd rose. I'm really not a fan of the bridge that's installed in this. It doesn't flutter as nice as a normal floyd rose does, and it doesn't seem to have the normal tone that I look for in the floyd rose. It just seems to be a bit more mellow than the normal floyd. The fretwork on this was great, so no issues there. It's a 22 fret neck instead of a 24 fret neck, and that might be a downside to some people. You'll have to see whether or not you prefer those extra 2 frets enough to want to get one of the normal Dinky guitars that Jackson has to offer, or maybe even a Soloist. The rest of the guitar was pretty much what you'd expect.

The guitar had a Seymour Duncan Jazz in the neck and a Custom Custom in the bridge. The Custom Custom is a very thick sounding pickup. It can do a lot in terms of genres, but it seems to be suited towards darker tones overall. If you're looking for that super bright spanky tone, go get a strat or something as you won't be getting it from this unless you split it. The low end on this isn't quite as tight as the normal Custom, but it's not too bad. The Jazz in the neck is very clean sounding. It works great for clean tones, but it can sometimes sound a bit digital or linear for leads. It's not bad, but there are better pickups out there for leads, I believe. I tend to prefer the 59 in the neck myself.

The guitar is good, but I really wish it would have had an original floyd rose instead of the licensed bridge that was installed in this. Also, the overall guitar was just very mellow and didn't seem to have a ton of bite. I think that has to do with the poplar wood, combined with the cheaper floyd rose bridge that was installed in this guitar. It could have also had to do with the Custom Custom in the bridge.
Did you find this review helpful?yesno
»

Jackson Dinky DR2
5
Jackson Dinky Reverse, made in the USA (Ontario, California), standard series that was built only for 2 years, in 1996-97.

- Bolt-on quartersawn maple neck with scarf joint. Gunstock oil finish.
- A thick ebony fingerboard with no inlays (but there are side markers of course!).
- Scale 25'' 1/2 with 22 jumbo frets.
- 2-piece poplar body, in gloss black finish, reverse headstock, "Jackson made in USA" decal.
- All chrome hardware with&nbsp; Jackson JT500LP locking tremolo.
- One master volume knob, one master tone knob, and a 3 way toggle switch.
- I equipped her with EMGs (81 85) with metal chrome rings (original pickups were Duncan Screaming Demon B and Jazz N).
- Cool details, all the backplates are made of brushed alloy, no cheapo plastics like the MIJ.

No frills at all here, to keep the price rather low: no MOP inlays, no bindings, no MOP logo. But the essence of any good USA Jackson is present: excellent woods, good finish, no flaws and a great player!
Only regret, since it was among the cheapest US models, the tremolo is a good JT580LP, not an excellent Original Floyd Rose. I actually replaced the JT580LP with a good OFR without problem, just removed the japanese trem, slapped the OFR in, restrung and tuned the harmonics, nothing more. So easy! And much crispier with an OFR!

A classy, yet very sober look.

Still, the perceived quality is far from the Japanese models, it's a real US guitar.

The neck is fairly wide and flat, the same as the DK-1's. Not an awful Ibanez ruler. The feel of the oiled neck is just great!

It is immediately comfortable. The absence of fingerboard inlays is definitely not a problem, you get used to it very quickly. And it gives the guitar a killer look!

The action is definitely no fret buzz though, the Floyd is recessed in a very deep route, and stays in tune.

Access to the upper frets is good too, thanks to the heel contour, the neck plate is slanted to help reaching the upper frets. Better than what Jackson do with their Japanese models.

The weight is ok, much heavier than any basswood stuff, still it can be compared to the weight of an alder guitar. It won't break your back!

Unplugged, the sound is wide and rich. Great news!

Added
28/06/2004: I'm getting bored with Floyd Rose equipped guitars. You can't drop tune on the fly, changing strings is long, double bend are terrible, etc. Pity for it's a great axe, highly addictive!

The finish is definitely good, no flaws whatsoever, the neck is incredible, smooth, fast, the thick ebony board is pure black, no discoloration, awwww this guitar is a gem.

I have no clue how the stock Duncan Screaming Demon B and Jazz N sound: the previous owner replaced them with DiMarzio Evolution bridge and a Fred in neck.
I did not keep this DiMarzio setup anyway, the Evo is just NOT what I like (stupidely bland with too many trebles), and if the Fred is superb in bridge, it was not very convincing in neck.

But with da EMGs !


Despite the EMGs, she remains quite versatile! Ok, don't expect stuff she CAN'T do, like Telecaster or P90 sounds. When you buy a Dinky, you don't expect to play in a
jazz band... get a SweeTone instead!

Still the clean with the 81 is not the warmest (bear in mind it's a ceramic pickup, not an AlNiCo one!), still you can use it for funk, bluesy stuff, rock. It's not outstanding, but the 81 can make it do.
The 85 has more warmth, a rounder sound, still it does not go muddy. Cool even
in jazzy stuff.

In crunch, the 85 goes well beyond what I expected, he really has his little characters, and can cry a blues! Yes! The 81 is fine in crunch too.

But yep, this setup is definitely good for high gain!

In good old metal, it's a gem! The EMG 81, always sharp, even on massive palm mutes, a tad aggressive, never muddy, and harmonics come out easily!
Ditto for the 85's harmonics is also remains sharp and accurate, and very singing!

It's really a typical Jackson rather aggressive when you want it, a sharp sound, in your face, with that magic Jackson feel.

It sounds like a dream with my Triaxis / G Major / 2: 90. I still can't believe how good they mix so well together!

Added 28/06/2004: farewell Mesa, back to Engl, with a PowerBall and a 4x12 cab with V30 speakers. Wow there again, It's just purely addictive! Pure Jackson, actually.
It has a grain of its own and really recognizable! Sharp without being too aggressive, big but not fat, geeezzzzzzzzzz!

Rather hard to find (2 years of production only), she's is beautiful, classy, easy to play, while remaining simple and what a&nbsp; sound!

No regrets, except for da Floyd (though it stays in tune hey).

I kinda fell in love with her! Muhahahaha!

Added 28/06/2004: I felt like selling her, not because it's a bad guitar, but because of the tremolo, I do not play her as often as I should. At one stage, I preferred my SLSMG, because this latter had a hardtail.

But as soon as I plugged the DR2 again, I decided to keep her as long as I could, there's love in the air, Jackson Power!!!&nbsp;