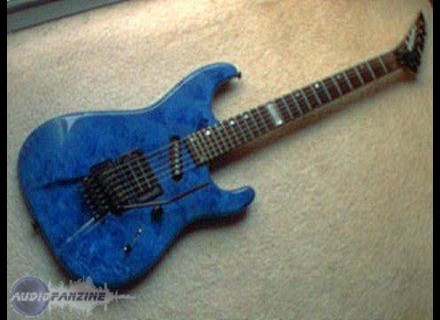 Dinky Ltd. ´88, STC-Shaped Guitar from Jackson in the USA series.

Jackson Dinky Ltd. ´88
4
This is one of the old guitars that happened to have hit the shop. It's one of the classic Jacksons that really put them on the map back in the 80s. There's a reason so many people played Charvel/Jackson guitars, and if you played this guitar, you'd see why. The guitar features an alder body, a maple neck with a rosewood fretboard, 24 frets with offset inlays, an original floyd rose bridge, HS configuration, one volume, one tone and a three way switch.

The neck on this was very broken in. You could tell the previous owner played it quite a bit. It was refretted once in its lifetime, and the new frets were in pretty good condition. They were starting to dimple slightly, but it wasn't a huge issue, and I was able to get the action I wanted. It had an original floyd rose bridge, and this happens to be one of my absolute favorite floyd rose bridges. It flutters amazingly well, and it sounds great to boot. The finish on this was very cool, and despite the guitar being beat up from its years of playing, it was in pretty good condition overall. I kind of wish the neck pickup was moved up a bit closer for looks reasons, but it's not a huge deal.

The guitar had a Hot Rails in the neck and a JB in the bridge. The JB in the bridge is an awesome pickup. It can do nearly anything you want with the correct amp. It can sometimes get a bit harsh at times, and it did have that classic 80s high end that most people associate with these classic guitars, but it was still an awesome sound. It cuts through like a knife in a band context, so it can be forgiven. The Hot Rails is a super fat sounding pickup. However, because the neck positon was moved back slightly, you have a slightly cleaner and touch less output version of the normal Hot Rails that so many people have come to know. If you've ever found yourself wanting a Hot Rails with less bass, I'm sure you'll find that the pickup position on this guitar helped make that possible. By moving it closer towards the bridge, you help brighten it up a bit and lessen the overall output.

The guitar is great, and I really wish there were more Jacksons like this out there today. The new Jacksons just don't compare to these older ones. There was something special about the old guitars that the current cookie-cutter ones can't seem to match. If you ever get a chance to play one of these, I recommend you jump at it. They're getting harder to find, and people tend to hang onto these older ones more.
Did you find this review helpful?yesno
»