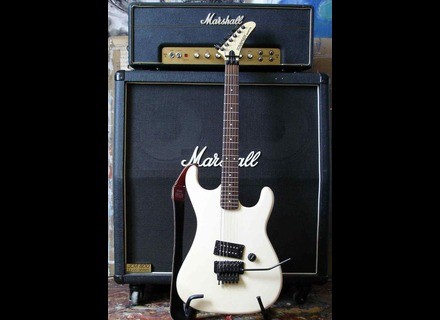 Kramer Baretta
3
I purchased this guitar at music yo.com for 260 dollars plus tax.

I liked the humbucker sound of this guitar. I also liked the look. This guitar had some weight to it and had a very nice finish.

Well it was a marked improvement over the kamer focus I bought but not as great as I would have liked. Though there are three positions to be switched to and a single/humbucker knob for more tones, it all sounded the same. The different pickup taps are just not the variety of sounds I would have liked. The fretboard is nice but can't come close to the feel of my fender american strat. I also had problems staying in tune even after locking the trem in place. I suggest using heavier strings and getting the bridge springs tightened. My pickup selector piece also crackles when I switch it.

Construction is nice and solid. Unlike the kramer focus this guitar actually had some quality put into it. The steinberger trem is nice because it has a lock option.

Shortley after buying this guitar I stopped playing it in favor of my acoustic. I just hated struggling with the tuning problems even after getting the guitar set up by a technician. At the price I payed you would think it should be an intermediate to professional guitar but it is not. This is a straight up beginner guitar. I bought a fender american strat and let me tell you my acoustic now takes a back seat to the fender. You get what you pay for is the absolute truth.

Kramer Baretta
4
The Kramer Baretta was one of THE guitars to own in the eighties. Due to the endorsement of one Edward Van Halen, Kramer was extremely successful in the early to mid eighties as one of the premier companies making superstrat guitars at the time. The Baretta was basically the company's take on Ed's famous one pickup guitar that graced so many stages throughout that time. It features an alder body, a maple neck with either a maple or rosewood fretboard, 22 frets with dot inlays (some later models had claw inlays) an Original Floyd Rose tremolo, Schaller tuners and a Seymour Duncan JBJ humbucker with a single volume control. The guitar was made in a variety of colours - both solid finishes as well as some cool custom graphics painted by people like Knapp or Kline. They were built in Neptune NJ, though many bodies/necks actually came from ESP in Japan.

The design of the guitar is reasonably ergonomic overall. The shape lends itself very well to fast playing, and the feel of the neck is totally appropriate to some EVH type technical flights of fancy. They were a high end guitar back in the day and the craftsmanship was excellent on these guitars. The body sits quite well on your person and it's well contoured and fairly light to boot. The upper fret access is great too. It's not quite as good as some of the later Ibanez RGs or JEMs but it's pretty awesome considering the time period.

Getting a good sound out of this guitar is pretty simple overall. It doesn't have a lot of controls, and it's not the most versatile ax in the world, but when used for technical rock or shred stuff, it has a sound that is the bee's knees, man!

I've tried this guitar through various different amps and it's definitely designed with the high octane player in mind. Though it doesn't really have the highest output in the world, it's definitely a rocker's guitar. The JBJ pickup has excellent harmonic content and put through a Marshall or Mesa, it just sings for rock rhythms or really crazy and wild sounding lead work a-la EVH or George Lynch. It's a bit less refined sounding to me than a Charvel San Dimas or an Ibanez but it has a certain raw quality that just works really well for eighties hard rock.

All in all I think the Kramer Baretta is a really excellent example of the 80s superstrat. It doesn't have all the bells and whistles of some of the later models, but it has that tone that everyone wanted or had back in the time of big hair and flashy guitars. They can be picked up for under $1,000 used which is a killer deal considering the quality and tone that's available. Definitely check one out.
Did you find this review helpful?yesno
»

See all 38 photos of Kramer Baretta »