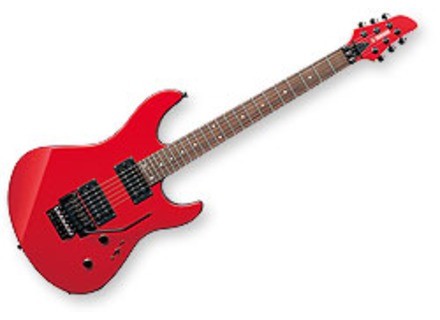 mightycorp's review (This content has been automatically translated from French)" Just beautiful."

What type of bridge (Floyd, Wilkinson ...)?
Licensed Floyd Rose bridge, contrary to what everyone says, it never tune for me, even on solos of John Petrucci and Syu of Galneryus, which are known for their bends phew.

What kind of stick?
For the type I do not know, but very nice being that I went to a Yamaha Pacifica 112J to RGX220DZ, I am perfectly satisfied with the sleeves of two guitars, I must say that the Yamaha handles are of good quality.

How many frets, what kind of micro as well as their configuration?
24 frets, 2 humbuckers Hambucker I think spent the Dimarzio John Petrucci, but for the moment the sound of the guitar standard microphone quality is amazing for the price.

The handle is it enjoyable?
Channel magnificent snugly.

Ergonomics is it good (in terms of shape, weight ...)?
The form is perfect, I like the style, for weight there is no annoying light enough it seems contrary to the predecessor of this guitar.

Access to acute (recent freight) is it easy?
Yes easily, at the same time it is the 24th is not there for decoration.

Gets it easy to sound good? ...
Zoom G7.1ut output with a bass amp Ibanez BSA-10, I promise you that this material is for beginners, but the sound is very similar to that of John Petrucci.

Are they suitable for your style of music?
Tested (clean, blues, rock, metal), it can be easily adapted with a few adjustments, if one knows about it.

How long have you been using?
Three months.

Did you try many other models before buying it?
Oh yes, RG350DZ Ibanez (I think the handle is too slippery), Yamaha Pacifica 112J (simply beautiful, I'm hardly separate budget issue).

What is so special that you like most and least?
The handle is quite large, I liked to have white as my penultimate guitar and the Floydd.

How do you rate the quality / price?
More expensive than some well known guitar (I finally, after playing, I think each judge in his own way.)

With experience, you do again this choice?
Oh yes!

Yamaha RGX220DZ
4
- In what country does she makes?
Yamaha ... No bitch in Japan one might think, but the "made in china" on the back makes me think it might be in China that it has built t ...

- How many frets, what kind of micro as well as their configuration?
24 frets => on the last rope, available until the 24th plutoto box easily, harder for the front Deniere, then on the 4th, it&#39;s hard enough access to the 22nd, and for the 2 and 3rd string , to the 20th box, and the bass string, access to the 19th, and yeah guys, will go in tapping! lol
2 humbuckers (humbuckers so) NOT splittable!! but very good clear sound all the same.

- What type of bridge?
Type floating bridge and floyd rose floyd rose by licens (I think the reference is the TRS-101)

20/08/06
A force to use the floyd, the stem stops over in the same place (screwed floyd), the fact that if I start too much force, it will tear. floyd is a low-end too, must not be abused. The rgatte go out of tune a lot too

-What are the rglages?
An effective volume knob, 1 Tone knob of a pickup selector 3 positions (bridge pickup, neck pickup and a mix of both)

- What type of race?
handle very nice (prefer it to a buddy that of its RG 370DX). But a strange thing: I have made accord
C #-G #-C #-F #-A #-D # and top of the neck, the strings are level with the frets, but the treble strings are high enough (nothing alarming, but weird), then?? adjustment problems?

Later I made ​​it readjusted, well actually it is a rule that the seller grants floyd evil and does not care about the setting of the handle. Now it&#39;s better

8 because there are better or scratches ...

- The handle is it enjoyable?
YES!! very pleasant, it "slides" on it, I swear to go from a folk or classical ca, ca a shock, one more force (even if not force ), And the note is played "alone"

- Access in acute (dernires freight) is it easy?
I said above, but I repeat myself: easy in the high strings, but harder in the grave.

- Ergonomics is it good (in terms of shape, weight ...)?
It is relatively good, as strato, not heavy, standing or seated play is simple.

- Gets it easy to sound good?
Yes, clean or saturated. its just nice adjustment and basic chords, but in a good setting drop, taking a bigger and it nikel. for sound, not forget to come out of the amp. I play marshall mg 15cdr and I &#39;m satisfied

I put 10 because it is perfect for me

10 Later, it&#39;s a bit too much, I got carried away by the enthusiasm of the first skyscrapers. it is not a killer sound, but not bad, it looks like something muffle the sound (ca not come from the amp) and PM not come out very well

- Should it your style of music?
Yes, I put a bit of Cradle Of Filth, I play thrash with friends, and it&#39;s going. its aggressive with the right setup. if you have the right settings, you can play rock, blues, I know, I &#39;ve never jou.
Later as its not aggressive enough, not heavy and fat

- What kind of sound you get and with what rglages?
Its not aggressive enough, even with a low background, almost no contour, and treble in the middle. good clean sound (that is confirmed by somebody who made the scene!), even with humbuckers (like what, ca n &#39;has nothing to do)

- What are the sounds you prfrez, you dtest?
I like the sound that it made with my settings even if there is better. I &#39;hate no

- What is the particular feature you like best and least?
the handle is great, the acute access to which is sometimes done in tapping (rarely)

- Have you tried many other models before acqurir?
No, just a ibanez RG 370DX and an GIO has a buddy, after a squier NTL.

- With the exprience, you do again this choice?
It remains to be seen, maybe now I would rather tap into the low-end ESP
This scraper is perfect for me, cot aesthetics, there enormment better, but this is not what he should privilgier. She has a good sound. no complaints.
The floyd is the tuning, but I use that much, may be that in force as a nag all the time she goes out of tune, but it remains to be seen

Later I maintain that the clean sound is giant!! I could not tell if it is crystalline or jspakoi, but very good, less good in distortion but it&#39;s not an either dung ..

I put 8 qualitprix for its good value, I lowered the rating because the ear with the habit has developed, and we better be scratched to a slightly more expensive
20/08/06
I still drop the note, because it scratches me tired just a force, a huge lack of sustain, it dessaccorde a little too often, and the floyd is not great.