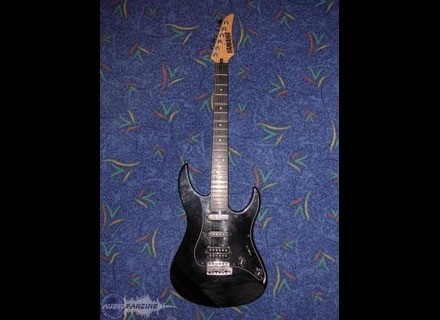 Yamaha RGX112P
4
The Yamaha RGX 112P is an electric guitar, best suited for a beginner. I don't own this guitar but my roommate, who is not primarily a guitar player, has it for messing around with. I've messed around with it a bit myself and it's actually not bad for the price. Yamaha can afford to make decent instruments at cheap prices since they are indeed the largest manufacturer of musical instruments worldwide. I'm not sure what materials the guitar is made from, but it has two single coil pick ups and one humbucker.

The overall feel of the Yamaha RGX 112PYamaha RGX 112P isn't the best but it's playable. It looks like the guitar is made for hard rock or metal players and it seems to have a wide neck like that as well. The pick ups have controls for tone and volume as well as a switch to go between or blend the the two single coil pick ups and the one humbucker. It's not bad sounding plugged in, but it's not great.

I wouldn't say that the Yamaha RGX 112P is best choice when it comes to overall sound. It's not bad for a beginner's guitar, but let's just say that you're not going to want to record with it if you're an experienced guitar player. It's nice that it has a bunch of control between the three different pick ups, but it's still not the most versatile sounding guitar in the world. This all said, for beginners it's absolutely going to do the job.

Considering the Yamaha RGX 112P as a low cost option, it's a pretty good overall choice. I'd mostly recommend it for metal or rock guitarists as it not only has that kind of sound, but the look to match. It's a great deal for the price, but if you're looking for a great guitar, this isn't it.