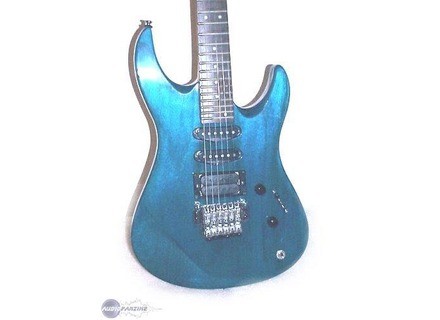 RGX312, STC-Shaped Guitar from Yamaha in the RGX series.

Yamaha RGX312
4
IV PLAYED FOR ABOUT 10 YEARS. I PLAY A YAMAHA RGX 312 I LOVE THE GUITAR BUT HAVE HIT A BIT OF A WALL AT THE MOMENT I HAVE BROKEN A PART ON THE BRIDGE AND CANT SOURCE PARTS ANYWERE. PLEASE HELP IF YOU CAN ON 0437037269 THANK YOU

LOVE THE ROCK STYLE LOOK. THE PAINT FINISH (TOUGH) AND THE SOUND.

Yamaha RGX312
5
I bought this guitar About a year ago(2003) at a local guitar shop for 450$. I immedietaly fell in love with the look of this guitar.I played it in the store and the sound just about knocked me over. You can play a very dirty song with loads of distortion, or you can take it down to a softer jimi hendrix sound.

The Humbucker on this guitar is fantastic. It gives a good crunch if your into metallica or slayer. Or if you into softer music it makes a beautiful clean sound. The lock in tuners next to the nut are fantastic my guitar never comes out of tune. The fret board is wonderful, very easy to solo and move around across the fret board. Very well made with hard wood and a nice solid finish.

The bridge is hard to get used to but once your over that there isnt much else i can say i dont like abuot this guitar.

Very well made with hard wood and a nice solid finish. Not an easy guitar to chip or damage. Very thick coat of paint with a good quality clear coat over the top. The fret board is made out of a good wood and lasts through any amount of torture you can dish out.

An excellent guitar for beginners all the way to professional musicians.

The_guitarist's review (This content has been automatically translated from French)

bbhack's review (This content has been automatically translated from French)

He is a strat like: alder body, handle, saddle, rosewood fingerboard 24 frets, tremolo "the" Pink Floyd (but only duck), nut blocker: Mechanical and microphones in the SSH config All "noname", probably yamaha or subcontractor of the era.

Finish "shiny satin, black for mine.

Taiwanese manufacturing is rare these days ...

Trslgre guitar, a little dsquilibre wearing seat because she was leaning cluck of the bridge.

For the rest the handle in the guns silent guitars "the ibanez" so flat and thin, the action could be very low RULES, dcoupe with the horns "EXAGRES es "to facilitate the CASC LATEST boxes ...

Keeping silent Plutt good agreement if we did not use too much vibrato up, rather average otherwise.

Gnraliste guitar and some nice bright at the edges.

Despite the look "hard rock" sound remained fairly straight and neat, only twice was a little more goes into it.

In the era I had a Fender Sidekick (35 reverb I think) and the sound was more clear qu'honnte.

on the other hand for higher sound nervous, she was a little light, the same amp. Saying that with a 1st price of disto era (PSK?) Saturated the sound was a clear trend towards the driver Plutt punk than to the "big blues.

But overall the sound silent correct gnraliste and no personality ....

For a beginner, and please era, I think it was an excellent deal.

For a very low price after all ($ 200 new) it had a very correct instrument: its small palte dgueulasse and not an instrument stable and easily playable.

What is the intrt posting a notice on this guitar?

Well first it was very nearly a notice citing qq give and also, as this instrument has given me my feelings Premire "strong" to music (composed FIRst group and concerts) I AF is an opinion on it would make a small tribute.