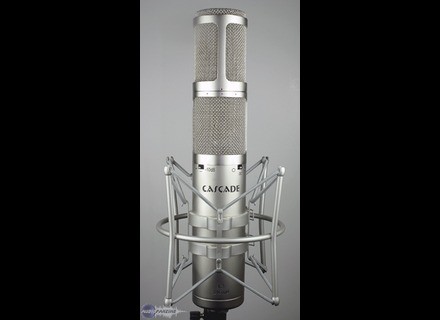 Cascade Microphones L2
4
This is a large diaphragm condenser microphone that I use quite frequently nowadays. It's a lot cheaper than many other large diaphragm condenser microphones that are of a similar quality. While it's generally used more for studios than live, I do think that it is a better option than most large diaphragm condensers for live because it's built tough and it is on the cheaper side, so it's more easily replaceable on the off chance that it does break (this is unlikely unless you are careless, though). There is only one cardioid pattern, which other reviews have mentioned, which is unfortunate but that's the trade-off that you make for having such a good price.

I like the surprisingly versatile use of this microphone. I have used a pair of them as overheads, which is a decidedly unique but often effective use for them. I have also used it in tandem with a dynamic mic on a guitar cabinet, which resulted in a fantastically detailed sound. I don't particularly like them as room mics as they don't have a more encompassing cardioid pattern. But there are certainly good uses for them, if you have no other options for vocals these aren't really a bad option, and they work on acoustic guitars well too. The sound is definitely not on par with a Neumann U87, or any tube-based condenser, but that's to be expected given the price difference between those mics and this one. Also, you don't have to worry about this one breaking on you and costing a fortune to fix. I think that for the home studio, or even some live situations, this is a great bet especially if you are on a budget (which, honestly, most of us are). Highly recommended unless you've already got better mics to work with but if you are looking for a mic with a good price tag you found 1!

Cascade Microphones L2
4
The Cascade Microphones L2 is a stereo large diaphragm condenser microphone that is designed for use in the recording studio. The mic has two separate capsules and all, along with it's own power supply and 5 pin cable. The mic has a frequency response ranging from 30 Hz to 20 kHz and has cardioid, figure eight, and omnidirectional pick up patterns to choose from. The mic also comes with a case and it's own shockmount.

As far as stereo microphones go, you aren't going to find many of them that are cheaper than the Cascade Microphones L2. More and more you're starting to see microphones like this for cheaper, but I haven't seen many stereo microphones going for this low price. Of course you're getting a cheaply made stereo microphones, but it's a stereo microphone nonetheless and it actually sounds pretty nice. I've only used the L2 as a room microphone while recording a drum kit, but it did a really nice job of picking up the ambient sound in the room, while giving a very nice stereo spread feel. It's nice that you don't have to worry about phasing or anything, so in the future I'd definitely like to try out the L2 as drum overheads as well. I've used a few other microphones from Cascade, but this is probably the best bang for your buck out of any of them I've used. This would be fine in either a professional or home studio, but only in a professional studio if you're going to use it once and a while. If you want a stereo mic to use on a daily basis, I'd recommend something like the Shure VP88 instead, as it sounds better and will last longer. However, if you're interested in a good sounding stereo microphone on the cheap, the L2 is the way to go.
Did you find this review helpful?yesno
»