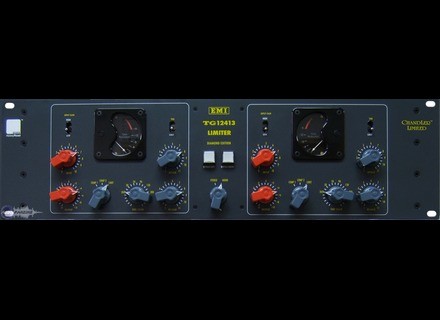 The make up of the Chandler Limited EM TG 12413 Zener Limiter isn't too hard to follow as it has pretty standard parameters in terms of its basic features.  Each channel of the has a slew of parameters including knobs for input, output, mode (limit, comp 1, comp 2), side chain, release, and attack.  Each also has sliders for impedance and THD.  You can also choose between using this as a mono or stereo unit and it also has bypass buttons for each of the channels.  This is pretty much all that there is to the unit and I would imagine that if you are using a high end piece of gear like this, that you have had some previous experience with compressors and limiters and will be able to figure out how to use this pretty easily.  Unless you are a beginner I don't think that a manual is necessary at all.

The sound quality of the Chandler Limited EM TG 12413 Zener Limiter is just about as good as it gets for a compressor/limiter.  It can be used in pretty much any situation as the array of parameters make it possible to manipulate the tone in a way that it would be useful for just about any instrument or voice.  Having two channels is great because you can link them up and use this as a stereo pair if you are trying to get a stereo spread of a sound, which for me is a huge plus.  It not only has a realistic tone, but it is one that is warm and full sounding in every way.  I definitely don't have any complaints about the sound of this unit.

I've only used the Chandler Limited EM TG 12413 Zener Limiter a few times as I don't own one, but I've used it enough to know that it is a special piece of gear.  It is as good sounding as any hardware compressor/limiter out there that I have used.  While it does have its own sound, in my opinion it is definitely a versatile one and I have found it useful to use in pretty much every situation that I have tried it with.  The price of this is of course very expensive, so I would only really recommend it for those who have a lot of money to spend on a compressor or a professional studio as these really cost a pretty penny.  Even those that can't afford one of these like myself should know that if you ever get the chance to use this at a studio like I did, definitely take advantage and try it out!