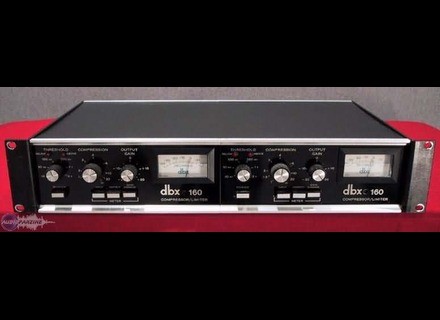 dbx 160
5
The original Dbx 160 comes either as a single channel compressor/limiter, or as two paired together. The one that I've used is the model that came as two in one rack mountable casing. It is an analog piece of gear, with the 160 now coming in a variety of new models. I'm unsure what type of connections it has in the back of it since the one I used was already racked up and ready to be patched with the patch bay.

The make up of the Dbx 160 is pretty standard for a compressor/limiter. Each channel has parameters for threshold, compression, and output gain, which is almost as simple as you can get for something like this. The 160 also has a VU meter which is programmable and can show either input, output, or gain change levels, depending on which button you press in. Even less experienced users probably won't require a manual, but I haven't seen it anyway so I can't say anything about it's make up.

The Dbx 160 is undoubtedly the best of the different 160s that I've got experience with. I'm a big fan of the way these older Dbx units sound in general, as I think they have a lot more fullness to offer when compared to the newer Dbx models. I've used the stereo 160 in a variety of formats, including to track on drum overheads - really just to touch them to keep them in check and to add a bit of warmth to the sound. I've also used the Dbx 160 for mixing with a variety of applications that include bass guitar and acoustic guitar, again just to add some warmth and thickness to the sound. These are really just great all around compressor/limiters and I would bet that they would excel in most situations you put them in.

I don't know what type of price the vintage Dbx 160s command now, and I do see them here in there in professional recording studios. As far as I'm concerned, these older Dbx units are the best that they have to offer, and the 160 in particular really sounds great. I can't say a bad thing about the 160 as I've had nothing but good experiences with. I'd encourage anyone with access to one of these to take advantage of it and give it some proper use if you aren't already doing so...