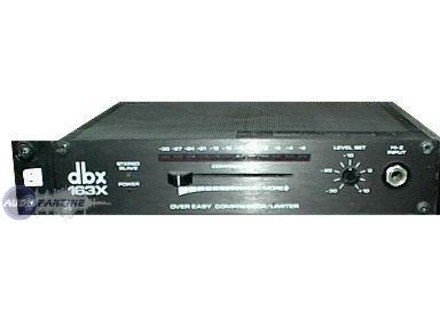 dbx 163X
5
The DBX 163X is a simple compressor/limiter that comes as a single channel unit. It is an analog piece of gear, and only takes up half a rack space, so if you had two of these you could fit them perfectly in a single space in a traditional rack casing. I don't know what types of connections it has, as the one that I've used was already connected to the patch bay, but it does have a 1/4" input in the front.

It doesn't get much simpler than using the DBX 163X for a compressor/limiter. It only has a slider for setting the amount of compression that you'd like, and a level knob for setting the gain make up/output level. That's everything there is to know about the make up of the 163X, so as you can tell this is a very simple piece of gear. It also does have a series of LED lights for metering your compression level. I haven't ever needed to look at the manual for this, so I don't know anything about it.

The sound quality of the DBX 163X is really quite good. Generally I'm a much bigger fan of the older DBX gear, but the 163X has a more modern compression sound. It's good for a variety of applications, but I've had success using it mostly on drums. I don't think that it sounds full enough on lead vocals, but it depends on the singer. In general I use these for mixing drums, but again they are definitely suitable for use with other instruments as well. It's really easy to get a quick sound, which is also a big plus with this, as it allows you to see quickly if it will work for the application you're trying to use it for.

For a compressor that can be had at a very cheap price used, the DBX 163X is a great deal. It isn't up there with the DBX 165A and 166, but it has a more than respectable sound that is useful more times than not. I've used this in a higher end professional studio, but since they are pretty easy to find at a cheap price, they are definitely a perfect fit for a home studio as well. If you're looking for some bang for your buck in a compact compressor/limiter, the DBX 163X is definitely something worth checking out.

I have 10 years
unbreakable
the knob crackles a bit now, but it still works perfectly a
ACSS frankly gear

dbx 163X manuals and other files