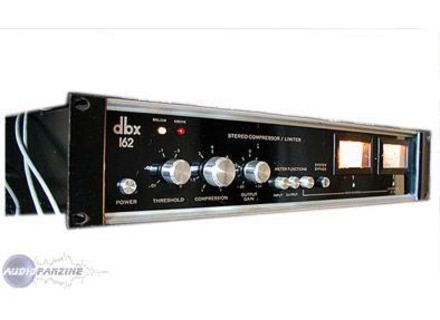 dbx 162
5
The Dbx 162 is a vintage stereo compressor/limiter. It is in the 160s family, and has the same look and style to many of the models in this line of dynamic processors. The 162 is strictly an analog piece of gear, with no digital parts at all. It has XLR and 1/4" connections and will take up two spaces in a traditional rack space.

The Dbx 162 isn't a complicated compressor, consisting of only the basic parameters found on most compressors, so if you have any experience with dynamic processors, you will definitely recognize these parameters and should be able to use it without a problem or the assistance of a manual. It simply has parameters for threshold, compression, and output, as well as metering options for each of the two channels. I've really only used this a stereo compressor on stereo pairs of recordings, and haven't tried to split up the channels, so I'm not really sure if this is possible.

The tone quality of the Dbx 162 is very similar to that of the 165A, but definitely has its own sound as well. Being that it is a stereo compressor, I'd first recommend using this on stereo pairs like drum overheads or even a pair of electric guitar mics, but I'm sure that if you wanted to you could branch out with it and use it on unmatched stereo pairs as well. Like the 165A, the 162 certainly has a lot of grit to its tone, and isn't the type of compressor you would use if you were looking for a cleaner tone. Rather, I love using the 162 for situations where I might want to roll with a particular crunchy tone and enhance it.

The Dbx 162 is definitely one of the hardest to find in the Dbx 160 series, and Dbxs in general, so determining a price range isn't easy. However, if you were really interested in picking up one of these, I'm sure you could do so if you played the waiting game. Even though this is a great stereo compressor on its own, if you're really looking for this type of tone, I'd recommend looking at some of the other compressors in this line like the 165A that are a bit more accessible. Having said all of this, the Dbx 162 is a great stereo compressor on its own, with a style all its own.