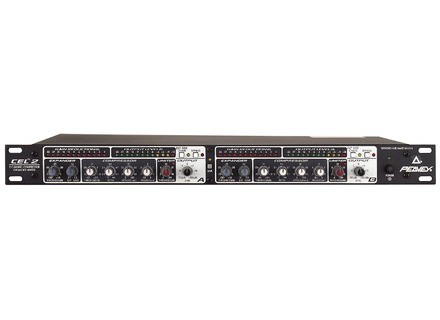 Peavey CEL 2
4
The Peavey CEL 2 is a stereo compressor, limter, and expander designed for use in the studio and on the stage. My experience with the CEL 2 is in the studio, but I have seen and heard of this being used in a live setting as well. However, this review will focus on the CEL 2's use in the studio since my experience with it is limited to this application. The CEL 2 has 1/4" connections for inputs and output as well as for a side chain. It is rackable and will take up only a single space.

The make up of the Peavey CEL 2 isn't exactly complex, but it definitely does offer up a lot of parameters and versatility, so it did take me a little bit to get used to everything going on here. Having said this, most of the parameters found on the CEL 2 will be familiar to experience users, so not too much adjusting is necessary. Each of the two channels has three sections for compression, limiting, and the expander. The compression section has parameters for threshold, ratio, attack, and release, while the limiter just has one for threshold and the expander has two for threshold and ratio, which when turned to one end or the other will either gate or expand your sound. In addition, the CEL 2 has an output level knob and buttons for bypass and for the side chain. I haven't seen a manual for the Peavey CEL 2, so I can't say anything about how well it might be put together.

The sound of the Peavey CEL 2 is about average in general, but it will get the job done for a number of different applications. The main thing that I have used the CEL 2 is for drums of all types, including snare drum, kick drum, and tom toms. I found that it sounded best on the kick drum, as it helped to give it a punchy sound that was both consistent and tight. While I didn't like it as much on the snare, it worked fine for what I was doing as it was really just for a demo. The CEL 2 probably works for other applications as well, including for stereo pairs of drum overheads, but I haven't used it in this capacity so I can't speak any further on it.

Overall, the Peavey CEL 2 offers up a good amount of versatility for a two channel compressor in this price range for this type of use. It is great having the expander and limiter in addition to the standard compressor, as it makes the CEL 2 more versatile than many of it's peers. I can't speak on what one of these will cost now, since they've put on the CEL-2A, but I would imagine that these aren't very expensive if you can find one used. While not the most exciting sounding dynamic processor that I've used in the studio by a long shot, it still will give it that glossy sound and will get the job done more times than not.
Did you find this review helpful?yesno
»