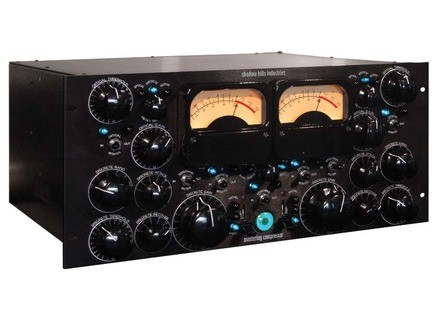 Shadow Hills Industries Mastering Compressor
5
The Shadow Hills Industries Mastering Compressor is a top tier stereo dynamic processor that is, as obviously stated by the name, intended for professional mastering. A piece of gear like this in a mastering studio is really what sets professionals from amateurs, as this is a serious, serious compressor. I'm not a mastering engineer, but the studio that I work at has a mastering studio and has one of these in there. It's an analog piece of gear, although I'm not sure on the connections since it's always been hooked up there. It is rack mountable, but it's huge and I'm not sure exactly how many spaces it would take up. It's so bulky that it should really have it's own rack!

Using the Shadow Hills Industries Mastering Compressor definitley takes some practice. While most of the parameters are self explanatory, some will require a bit of background info, or at least a few minutes to play around with it. Just take a quick look at an up close picture of one of these to get an idea of what we're working with here! It's definitely this amount of control that makes this a very special compressor. A manual would definitely helpful if you just bought one.

As far as mastering compressors go that I've used or heard used before, the Shadow Hills Industries Mastering Compressor is one of the best. It gives life to everything that is run through it and because there are so many different options, you can shape things in many different ways. It seems to be the go to compressor in the mastering studio on site for sure. There is really endless control here, making it possible to go in so many different directions with it, and ultimately giving you the tools needed to master each and every song properly. I'm sure that this would sound great for mixing as well, but it's really more than would be needed for a mixing application. That isn't to say that I wouldn't mind trying it sometime...

If you're looking for a serious mastering compressor to build your mastering studio around, the Shadow Hills Industries Mastering Compressor is a great place to start. This is the real deal, and the real deal will certainly cost you a good amount of money. It's all relative, so if you're looking to put together a real mastering studio, you know you're going to be spending some real money. Absolutely a compressor/limiter you need to know about if you're building a professional mastering suite.