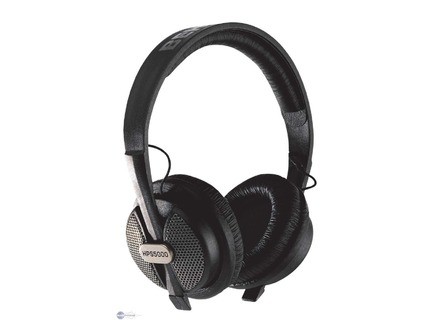 View all offers for Behringer HPS5000 »

correjy's review (This content has been automatically translated from French)

Behringer HPS5000
1
The most uncomfortable headphones I had. Impossible to keep more 20-30 minutes without earache.
The sound is not "flat" at all, very "loudness" (the bass and treble). it is a strong and pummeled almost about everything. I found an acceptable use as a headset for electronic drums, but not more than 20 minutes. For the Home Studio, run away!

Jamian's review (This content has been automatically translated from French)

Behringer HPS5000
5
Eh voila! I finally decided to replace my HPM1000 which, although still brave (it's the sound this stuff!) Had a quality improvable.
With the HPS5000, I'm on the back! Level sound quality, it is in other brands put 2 or 3 times the price for the equivalent. This headphone offers the best quality / price ratio that I have ever seen.
I withdraw, however, one point for ease of use, far from being equivalent to the older models. Dommaage ...
Did you find this review helpful?yesno
»

bohwaz's review (This content has been automatically translated from French)

From a sound quality point of view, for 38 euros you are not disappointed at all, do not bother to type 3 or 4 times in the "brands" for the gear that will disappoint half the time. Here is impressive, there's not to say. Very faithful in his return, there's nothing wrong. 10/10 for sound.

As against that spoils the practical level and feeling. The plastic, although solid, sounds really quite toc ... And frankly I do not have a big head but could not put it on the head without feeling in a vise, with a bad contact with the headsets and more. So the only solution be back as the djeunz. Maybe some love it and find it so cool but I have trouble when it comes to work several hours on compos ... I always feel that it will fall all the time (ok it never falls but good). It really is the black spot for me. That said it survives, and for 38 euros you can go over well given the quality of restitution.

By the way the big jack base unscrews to make room for a mini jack socket. Simple but brilliant, I had never seen that. Otherwise I would do might not be the same choice if I found qqchose with such a good sound, but more convenient to carry and in the same price range. In the meantime it suits me perfectly
Did you find this review helpful?yesno
»

cloreen's review (This content has been automatically translated from French)

Behringer HPS5000
3
In my case I bought this headphone emergency because my Sennheiser HD200 deuxime lch APRS me a little less than a year. Systm J'tais fache against the headphone jack of the HD200 so I wanted to try something different, less expensive, but not as a (the sennheiser may be in the 80 euros (ah No, I just vrifier, it is 60 euros plutt in now, so ...))
I regret it, but hey, precisely c'tait cheaper, so a rest honnte.

Comfort for the head is less good, but through the hoop against the neck is a little dj prs bearable. (One hour general maximum)
Then it's not really a headphone and closed it for the photographs Gnant's, (I say but I have not had the opportunity to try).
The sound, finally, is compltement dcevant from the HD200 ..

In short, I finally got the ide to reconnect my headset deuxime HD200 with the first cable (which had pt at a speaker, he, after more than 2 years and a lot of abuse), and since I do not use at all the HPS5000, which is really a bad memory. And a song just for the bad mix, I must take it again with the HD200. (L may be that everything does not come from the headphone, but good)
Rsultat: the next time the pte HD200, HD200 I take one. It must also be a matter of habit.
HPS5000 to recognize the advantages: it is certainly more solid and it is cheaper.
Did you find this review helpful?yesno
»
Read the 13 user reviews on the Behringer HPS5000 »