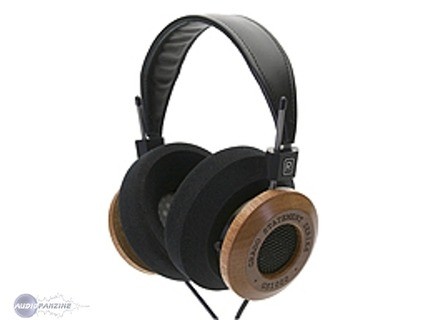 vmullot's review (This content has been automatically translated from French)

1 month / 250 hours of listening in bulk (so we can consider it a pretty run-in, an important factor for headphones).

<span style="text-decoration: underline;">most</span> are: the sound stage (stereo and back), relief (separating elements and exceptional shots), precision, delicacy, sensitivity (ability to listen to mp3 player, can play a very low volume with a very high accuracy), low (round and warm), the treble (32 kHz!), mediums, listening without fatigue, comfort (except mosses can scratch a after a while) aesthetics art deco (I have not yet ventured out into the street ...). Stereo headset of the great! I do not know if it is very suitable for monitoring and mixing compared to the righteousness of the spectrum (presumably there are more neutral and right but I'm not expert enough). In any case it's a great headset to keep for hours on the head, rediscover your clubs from a different perspective: Attention is a bit cruel at times because it means everything, the breathing of the pianist or conductor The leaves of partitions that run the reverbs bullshit on an album can cheap, the tac on guitars and other sounds supposed parasites.

the least are: distance, step back from music. You have not head in the amp or the bass drum so it's not necessarily always suitable for all types of music (I think of racing to rock and distorted music in general), I mean by that c ' is not a headphone that has the necessary teeth or rather close enough with the music on request. A bit too musical for the kind you might say. In fact it is surely also a matter of habit, it failed to listen to rock with such a wide scene actually. Mini negative point also to the handmade finishing (cutting fabrics and foams), it's weird that as compared to the first time you put when you open the box it may seem a bit cheap. Anyway in the end it seems very solid nonetheless.

So very very good for music it is very well recorded classical, electronic, R & B, etc.. A bit less distorted with music though, it may be a matter of taste.

- Did you try many other models before getting this one?
My best headphones until the Seinnheiser HD 25 SP which is still taken quite a blow to the face is Grado. But there is very good and natural, but there's not even sharp, not very low, not the same separation, but hey it's not the same price either! And I continue to use it for a walk every day anyway. But just when the evening he stays in the bag and I jumped on the Grado!

- What is your opinion about the value for the price?

More than 1000 eur in France is downright expensive at 650 euro on Ebay it will already better but hey it is clear that like good wine, a bottle of EUR 200 is not necessarily 10 times better that a EUR 20 because there are already some very good wine at 20 eur. Anyway I can not let me take off the ears so it must be a sign anyway

- Knowing what you know now, would you make the same choice? ...

Ben ouip actually not bad after an hour of listening I have a strange feeling: I'm not in love the headphone but I can not do without! In short it is not a headphone comes in eye-catching (or ear) but it still makes addicts. I really want to try others too (Sennheiser HD800?) To compare.

23.01.2010 Small update I'm currently listening to my new earphones JH13 pro who at the same price range makes a good slap in the GS1000 level of precision that comparison does not reveal much details and the straightness of the spectrum, compared the colors GS1000 pretty music. That's it, I do not change the note because it is always a very good headset but rather nicely colored, not for mixing, for example.