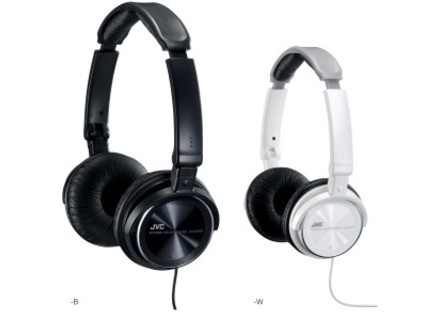 JVC HA-S360-B
3
I had a few headphones before this one, I kept it for two before a joint case.

I bought it at the time to the music on my phone. I listened to a little of everything, rock, pop, electro, techno, ...
It was very comfortable to wear, not too light, not too heavy for its size. The pads took my good ear without help but hear the surroundings.
Good arch, robust plastic. I could care hours on the ears.

The headphone looked strong, he did not have a detachable connection.
Beautiful finishes on materials.

It is the quality of sound that appealed to me, especially for the use that I had.
No sensation of sound isolation which was pretty good to walk in the street.
Did you find this review helpful?yesno
»

Anonymous 's review (This content has been automatically translated from French)" Suitable for listening."

I have this keg for about a year since.

This is my first casque.Je used it to mix a little with a small DJ controller.

I do not not describe negative and positive points, it is a headset you can not expect much.

The value for money is pretty good (30 euros TTC).

No, I invest myself in the DJ and I bought a good Sennheiser!
Did you find this review helpful?yesno
»

BassBeGood's review (This content has been automatically translated from French)" Disappointing"

JVC HA-S360-B
3
I had the Philips SHL 8800, but the cable failed at me, after 3 months (much too thin and not very intensive at the jack, and a day bed, over his left). I rather liked the sound, good bass without drooling (I listen all the grindcore than house and it was pretty nickel) treble well rendered, etc..

I went to the store and I could exchange it against the JVC HA-S360 in the same price, a little disgusted by the fragility of the Philips. It is quite nice, quite sober.
It is comfortable to wear, the headphones are quite comfortable. But he has one little problem: sound.

In fact, I was very disappointed by the lack of bass and very (too) strong mid presence. Anyone snare becomes unbearable, bass disappears, and a crash cymbal a little stronger you file tinnitus. Moreover, in public transport is pretty horrible as long as you ride a little sound.
For example, I mostly listened to the latest Devin Townsend, and the sound does not scale, it's rough. As a fan of Kyuss, I dare not even try to listen to one of their albums with this headset.

So if we must judge the value for money for the sound that Opeth would go for guys who have been rehearsing in a basement with 20W amp kit for a beginner, I would say it pretty bad.
I'm finally back in my store to exchange it against the Philips SHL 8800 I had previously owned.
Did you find this review helpful?yesno
»