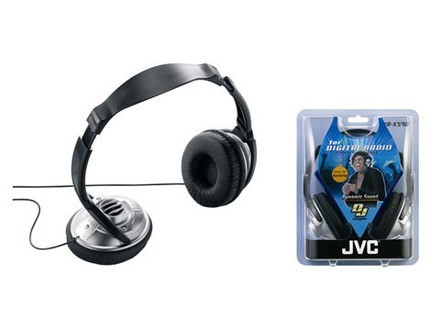 JVC HA-X570
3
The JVC HA-X570's are a set of 'DJ' headphones as advertised, but really are only suitable for general listening purposes. I'll say right up front that I wouldn't use these for anything where critical listening is necessary, as they are really only suitable for listening to your iPod with and things of that nature. They're definitely not the sturdiest headphones at all, and while I don't own a pair myself, I'd be surprised if they lasted too long for the people who do. I only really tried them out after a friend had them for listening on his iPod. Of course JVC tries to oversell them and present them as DJ headphones, but they're definitely not adequate for this kind of use. They aren't too uncomfortable, but to say that they are comfortable would certainly be a bit of stretch as they really don't stay on your head too securely. The ear phones themselves are pretty small actually. As far as sound quality is concerned, they don't have a great overall response as they're just not that great sounding. They'll do the job just fine if you're just using them to listen to music on casually, but definitely don't expect anything from them beyond this. They claim to have a 'super bass' sound system, but the low end response is decent at best and really isn't too well defined. In general the sound is average and just okay and definitely not okay for use in critical listening situations or even really for A/Bing mixes. This is what you're going to get when you spend such a small amount of money on a pair of headphones, but at least the good news with the JVC HA-X570 is that they are indeed incredibly cheap in price, but they're also quite cheap in design as well.
Did you find this review helpful?yesno
»