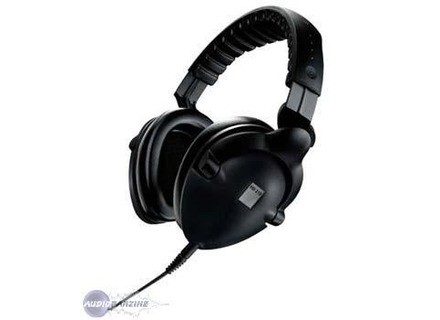 HD 210, Studio headphone from Sennheiser in the HD series.

Tamino's review (This content has been automatically translated from French)

Sennheiser HD 210
3
I took the headphones to record, I did not ask one of its extraordinary quality, the headset is "control", it was enough that it is properly closed and tench.
It is lightweight.
I have not tried before, the attractive price (44 euros) made me prsager it's not a bomb. Indeed, we do for her as ... point of view it's a horror.
Are extraordinarily low "swollen"! Derrire my monitor headphones, AKG 240DF one is screaming.
Repeat the selection if it's for the quality of his, no, if yes for the price.

Sennheiser HD 210
3
I confirm the view Previous: serious too intrusive
headphone not strong enough even hear when some noise from the outside.
Comfortable and lightweight, but takes a bit hot the summer.
Dj good solidity I tore the cord several times inadvertently stepping on ...
I t attracted by the price (-50% on sale in a supermarket) and the quality of the brand
I dj apprci on other models but I would do not have that choice.
Since I bought an AKG K240M trs that restores much of the spatial instruments
prcis and is much more reasonably priced (95 Euros).
CHARACTERISTICS manufacturer:
Type: dynamic, closed circum-aural
Bandwidth: 18 - 21000 Hz
Harmonic Distortion: <0.2%
Impdance: 32 ohms
Weight: 120 gr
Cable latral dconnectable OFC

underface's review (This content has been automatically translated from French)

Sennheiser HD 210
5
I use this headset for about two years.

I in no way endorses the two previous notices ...

To be honest I had the HD200 model for several years before I get the HD210 for a second headphone for my travel.
I was able to make a direct comparison. And much to my surprise, there is no difference!
I liked her already garnd brother dressed all in white, now I can say that the little brother (black) is simply the copy of an audio playback standpoint.
What I like about them is that they HD200/210 recreate the sound so clean, unpretentious, and while remaining neutral on all frequencies.
No need to inflate the bass ... The sound is as it should be: without unnecessary tinkering.
The comfort of the headphone is rudimentary, but it covers the ears well and so reduces outside sounds (maybe not enough for use in nightclubs, where the sound is unfortunately often too strong), which is probably the point low key.
Despite this and a price of 35 euros in supermarkets (I have unfortunately not seen ...) the HD210 dethroned by far all the headphones on the market - surprising but true! - Both on a "sound" that "wallet" (Dumoine in the mid-range)
My choice, if it were to do again, would be the same.
Did you find this review helpful?yesno
»

Djihad Joe's review (This content has been automatically translated from French)

Sennheiser HD 210
3
I think I have used it for 5 years, almost every day, whether to mix, listen to music / radio or watch a movie.

I bought it to mix and it suits me - did. I think you have prciser one thing a DJ does not expect the same things a headphone that someone working in the studio. What matters most to a DJ is a certain comfort, a fairly good insulation and a bass response. I did not say good or FAITHFUL bass response is the fact that it exists is enough. Everything a DJ needs to hear it's hard to wedge a "POUM Tchac" (bass drum / snare).

To my mind, this headphone filled CRITERIA fawn all correct: it is not too heavy (even if there are more lightweight), it is quite comfortable even if it true that a little sweat (but the advantage of plastic headsets is that you can clean them and do not s'frittent with age), it insulates well enough to mix in home or in a fte friends (in bote I do not know), and restores the sound of Manir than enough. Also I have not seen any drop in sound quality over the years.

One annoying thing: the cable is too long. I hindrance in several times and connections are not required. And the cable is 12 (changed twice).

In the era I had bought a sennheiser c'tait because, I found that 60 c'tait a price large enough for a headphone (I beginners), and that the atria could move which is very practical to mix.

Today j'achterais may be an HD 25 of the same brand (I have a friend who mixes with) is really comfortable, enjoyable, lightweight and has good sound ( better than mine I think).
Cel-said to over 100 in a headphone m'embte a bit, because as I said I do not need a headphone extraordinnaire.
Did you find this review helpful?yesno
»