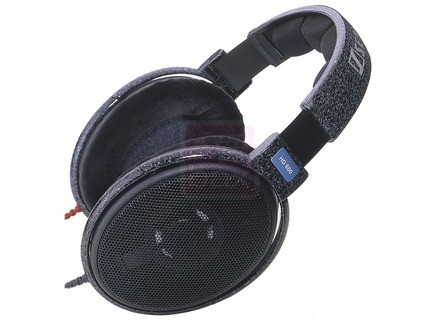 HD 600, Studio headphone from Sennheiser in the HD series.

View all offers for Sennheiser HD 600 »

I have since purchased the HD600 for my studio, where I use them for mixing tracks, and for mastering. I do all my mixing and mastering on speakers, but a good set of open back headphones gives a different perspective on a mix.

The comparison was done on a decent D/A converter with a good headphone amp. I listened to different styles of music ranging from , Jazz, Classical, Electronic, Rock and Metal as well as acoustic guitar and vocals.

I have to say the top headphone by far in every possible respect was the HD800. It had an amazing 3D soundstage where you could locate every instrument. Excellent frequency response from lows to highs with a solid but not overpowering bass. In fact it felt like I was listening to a set of high end speakers.

The biggest disappointment out of the 4 headphones tested was the HD700, it sounded very shrill in the high end, and that was enough to put me off testing it further.

Then came the HD650 which has very good imaging, not quite like the HD800 but excellent none the less. It's bass was very solid and clear, but the big downfall of these headphones in my opinion were the highs... they seem to have vanished when listening to acoustic guitar, which sounded like something other than an acoustic guitar through the HD650s. That alone put me off these phones. But, Metal and Rock sounded great through them as well as Electronic Music, mainly because of the great low end response.

Now to the HD600s. I was wishing I had the money to buy the HD800s but alas not at the moment, so I tested the HD600s thoroughly on all types of material. The first thing that became evident was that the HD600s had quite an even frequency response. The acoustic instruments sounded very real over the entire frequency spectrum. These phones sounded good on most material even on Metal, the top end was clear and crisp without being harsh. The bottom end was detailed and clear without being overpowering. Compared to the HD650 low end the HD600s are a little less pronounced, but still clear. In terms of the high end, the HD600s sounded far more natural to my ears than did the HD650s.

Comparing the imaging of the HD600s to the HD800 and HD650, the HD600s were not as wide as either of the other two phones, but still had a decent sound stage.

Comfort wise, the HD600 and HD650 were pretty much identical and felt perfect, and compared to the HD800, I found the 600s to be a better fit for my head. The HD800s might be better suited for people with larger heads than mine, and felt a little loose to me.

In terms of headphone distortion, the HD800s provided the purest audio of any of the 4 headphones I tested, with the HD650 coming next, and the HD600 following closely behind that. So the HD600 sounded very smooth to my ears but the other two were slightly smoother in sound quality.

Overall weighing up the price /performance of the 4 headphones, the HD600s were perfect for my needs and are an excellent headphone and for $333US new, a great deal.

I am using these in-studio with Waves Nx room modelling plugin with head tracking, which makes the headphones sound like you're listening to speakers, thus drastically imrpoving the imaging. I've also added Sonarworks Reference 3 headphone calibration software to my DAW which balances out the headphone frequency response, thus improving the bass response as well as evening out any frequency peaks or dips in overall response.

The HD600 headphones sound amazing through this system, and give me the ability to mix whole tracks entirely on headphones when I'm travelling and haven't got access to a full studio.

I'd definitely recommend the HD600s to anyone who's doing studio work and doesn't want to mortgage their house, but if I had more money to spend I would have definitely gone for the HD800s....... Maybe one day...

As for the HD600's 4 star rating, the HD800 would get the full 5 stars, but in this respect the top of the bar was set very high, and in comparison the HD600's did very well in my opinion.
Did you find this review helpful?yesno
»

Sennheiser HD 600
5
The Sennheiser HD 600 has a very clean sound and they are very comfortable. The only thing I didn’t like about them is the look and design of them. I feel the splashed color on them is very unattractive and should have been left off. But the sound of them outshines the look; they have an amazing sound with great bass response. The mids and highs are very clean and crisp and can be used to mix songs with.
The stereo sound and spread in these headphones is great. I have used them to work with in a studio and a band that I work with has used them to work live with. They have a frequency response of 12 Hz to 39 kHz. They come with a 10 foot cable which makes them perfect for my studio because they can reach just about anywhere. They are built well and will last a long time I just didn’t like the look of them.
When wearing the HD 600 around ear headphones I immediately noticed how comfortable they were but they made my ears really hot. I am not sure if they size of the was too big or what the issue was but for some reason my ears would get really hot and start sweating easily when wearing them and this doesn’t happen too often with many sets of headphones.
The sound is amazing and it should be for this price, but I do not know why they didn’t make them more appealing color and design wise. I even tried to look and see if they came in different colors but I could not find any different colors or designs. If the look does not bother you I highly suggest spending the money on these because you will not get a better studio sound under 500 bucks. The HD 600 headphones are some of my favorite headphones when comparing the sound of them to other ones that I have used under 500 dollars.

nuin373's review (This content has been automatically translated from French)" Excellent!"

Sennheiser HD 600
5
Open headphones.
Used since 2007 to mix, in addition to pregnant MSP5 Yam (recently traded for Solo6 Be).

I bought from an Allen & Heath XD-53 on a recce to supplement low (and it is a closed headphone).

The +:
- Great sound, including bass, finally (/ Solo6)
- Comfortable to wear comfort + open headphones (it is not "locked")
- Strength: never had a problem, even with the cable (though I use it a lot, and I even carted in external session)

Sennheiser HD 600
5
TRS phone high end that I use for a year now.
no regrets. Trslger, and super comfortable. no fatigue COST IDAL to master.
attention is an open headphone and at the sound studio it is possible that the sound coming out of the headphone is made by the micro ...
trs good quality headphone either at the component level and Aesthetics.
I use it in parallle with Sony MDR-7506.
Any time the fragility of care Cables Headphones.
Trs good quality foams, one would not hesitate to wear it. !
A possder absolutely home-studio owners for any self-respecting.
musically
christophe
Did you find this review helpful?yesno
»
Read the 14 user reviews on the Sennheiser HD 600 »