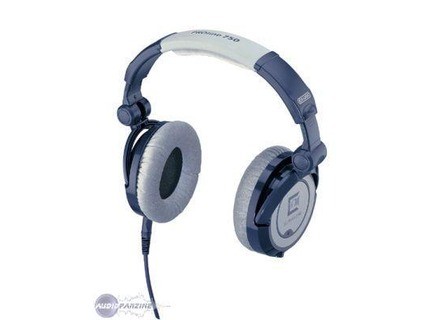 PROline 750, Studio headphone from Ultrasone in the PROline series.

Ultrasone PROline 750
5
I possde headphones Ultrasone Proline 750 1 Week, here is a review for this incredible make it known German headphone brand.
Dballage:
The headphone is delivered in a super box containing the headphone (

, a spare pair of foam, 2 son (right approximately 3m, a shorter tlphonique style), a carrying pouch and an audio CD of demonstration. This is the great class! The entire exudes srieux and manufacturing quality is excellent. Dun aesthetic point of view japprcie particulirement the range of blue, white, silver. The design is simple and worked (the signature of the big brands!). The size of the headphones is slightly too big my taste but it's the price to pay for an aesthetic quality of listening.
By positioning the casqe on the ears, First slap: it adapts perfectly to the contours of the head and is positioned in a twinkling dil. A lightweight pressure is felt in the atria, just what it takes to be isolated without impression DTRE crushed. The weight of proline 750 is soon forgotten so much feeling of comfort is great.
Lapping:
You plug the headphones, we put the album favorie in the player and listening: standard disappointment! Yes you your surprised to read some, but this is normal The Ultrasone headphones, like all high-end headphones, need DTRE rods in the same fawn that pregnant .dropoff window I advise you to: Connect your amp to eat him for ten CDs of hours in varying registers (bass, tracks, acoustic instruments etc) and put it on your head : baouuuuuummmm! L this is the true slap !! For me it has to be 20 hours of running for the headphones reveals its full potential, but after 10 allows a DJ to be a good idea. If you lessayez store, find much to know if the headphone t rod.
Listen:
From this point of view, the proline 750 is a marvel. S Logic technology gives lampleur sound (do not even expect when rendering 5.1.), Spatialization of sound is impressive and frquence band of the headphones should allow you dappr cial all your discotheque without qualisation supplmentaire. It purrs in the bass, this is mild in the medium, this is crystalline treble pure happiness! Another highlight, the headphones are designed to be pressed your ear, allowing to feel the music volume low. on the other hand, with its Impedance 40 Ohm, you will also enjoy fully the imperfections of your audio hardware: If your headphone breath a little, you'll know right away!
Mix:
For those wishing to use the proline 750 for the mix of the sound or production, you will have at hand a dune diabolical precision tool. Biensur it will not replace a good pair of monitors, but for some tasks, it is very useful.
Djing:
Before dacqurir lUltrasone, jenvisageais keep my old Sennheiser EH2200 for prcoute Dj because I thought the 750 would not be adapted such use. Big mistake on my part with the headphone on the head, it is no longer excusable to miss a pitch so this is prcis! A low phase shift sentend immediately, which means quen club situation, with volume lev in faade and returns not always cabin top, simply you lUltrasone proud to ensure that the mix is ​​good!
Verdict:
For me this is a no-fault! The headset reveals good in all situations, versatile and faithful. For the solidity I'm not too worried, German brands are rputes for their longevity. Only time will allow me to confirm it.
For our I put 9 because nothing is ever perfect, but it's not envy that I miss ...
Did you find this review helpful?yesno
»

gwendule's review (This content has been automatically translated from French)

Ultrasone PROline 750
5
I use it for three days.
These headphones are very comfortable to wear, and the gene is felt only after many hours of listening.
In addition the S-Logic spatialization makes this headphone in its closed magnitude approaching that of the headphones open or semi-open (see 2500 Proline equivalent but open from the same manufacturer).
I tried Beyerdynamic and AKG headphones, but I prefer the ultrasound because it combines the comfort of Beyer (atria velvet) with their rigor of restitution (the next great German) and rated more "air" of AKG.
The price / quality ratio is excellent because this headset comes with a carrying case, two connection cables (straight and twisted), an adapter 6.35-> 3.5, a CD listening ear and a set of parts.
I re-would that choice again if the opportunity is, but like all headphones depending on the use we want to do. It is true that with an impedance of 40 ohms, so no mitigation any pest or breath is audible (including MP3, yuck!). But I was looking for a headphone very faithful in returning to correct my audio tracks and it's perfect for this purpose (I know I know we must focus on studio monitors for that but this is fine with me)!
Did you find this review helpful?yesno
»

I initially wanted to buy the 900 pro but given the prices of 750, almost 2 times less expensive, I decided to take the 750 initially.

Attention, I want to say that my impressions are made on a current material of shit (I repost a notice when I go back in France in qq months, with real stuff)

Dabord I tried the demo CD and I took a big blow: on some tracks, the ultra sound is natural, as if the sound came out very good speakers, I even like saying the live but it could say that I exaggerate.
Other tracks "show" the spatialization: applause and fireworks among others, which are reproduced in space, I would not surround sound but the spatialization is very good, the best I have heard for closed headphones, or even may be the best short, I would have to recompare listening.
The spatialization is different than the AKG 701i, which is very good too (but open), in short, it feels good. Other tracks are present to "show" the clear sound, and other low etc. ...

I would say that high frequencies are reproduced, sometimes a little too present on some pieces, but I quibble a bit. Most other headphones do not have that at high frequencies is a bit hazy, as if the very high frequency harmonics are suppressed here, they feel very (too) well.
The sound is sharp, like a magnifying glass on the various instruments it is possible to "isolate". Unlike the Senn HD595, for example, or the sound is a mixture and where it is difficult to extract the piano by ear the rest.
With the Ultrasone 750, it does so very well. This is probably due to the spatialization I think. Also, the accuracy of the sound. Unlike others who have a sound very dull, this one has no sound ... different.
In fact, opening the headphone, we notice that a metal plate with small holes qq lie in front of the HP headphones, in my opinion, I S-logic principle is that sound coming out of HP in part reflect between our ears metal and Passover, which would effect the sound spatialization but not dull, dry, but to extrapolate to death, it&#39;s like
there was the reverberation effect that fesait spatialization. Anyway, I really like the rendering.

The spectrum has a wide area. The sound is rather well reproduces from the original, but there are better among competitors.

With clarity and spatialization, we have a magnifying effect on the music, we find all the defects, we hear the singer&#39;s breath, we guess it&#39;s a synt and not a real piano so ...

Typically, I find that the Augustinian are put forward, the medium a little behind. The bass is correct, what good is that they do not puff at all the rest of the spectrum as do some headphones. But sometimes I find them a little retait on some tracks.
Beyerdynamic of daft punk and very bassy and deep. On the Ultrasone Pro 750, are present but not as they actually are. While on other tracks, it makes very good.
But overall, I find it very balanced, with crisp and pure.

I can understand you not love these headphones at all because it is a different beast from other upscale and unique, just as one can love it in sound. But one thing is for sure is that to use the studio as a "magnifying glass" on the potential flaws, this is probably the best I&#39;ve ever heard.
Afterwards, an aesthetic standpoint, I find it quite ugly, plastic headphones of this price, they might make an effort. It is quite large.
The sensitivity and impedance allow playback on Walkman or iPod, but the volume will be reduced and the possibilities of the headphones will not be fully exploited (for AC amplifier required)
But I also use it in mobile mode and AC passes, finally good it is bulky and the volume reduced, but that&#39;s okay and the audio quality is at the appointment.

A big plus because the cable is removable, so the atria, it is resistant.

The pros:
sound quality: sharpness and precision
the spatialization,
the effect of "magnifying glass"
adequately covers the spectrum
strength,
removable parts,
the package.

The -:
The treble can be a bit too pronounced and the bass is better on other headphones, but it remains more than adequate in my opinion.
The appearance (plastic), size (imposing) and design.