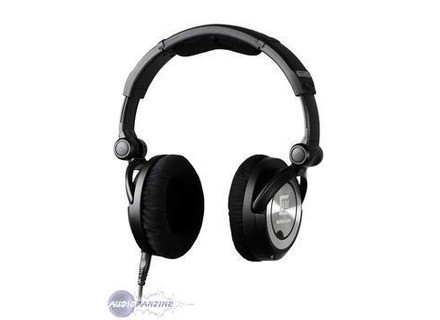 PRO 900, Studio headphone from Ultrasone in the PRO series.

Buy this productView price information >
View other reviews for this product:
This is a headset that uses a technology called S-Logic Owner '+ which is not to send the sound directly into the ear canal, but to enjoy the reverberations of the pavilion. This results in a relatively efficient spatialization. A CD is supplied that is probably used for grinding. Listening to the CD eyeful, but there is virtually as scenic phase, giving a 3D feel, but not on this headphone!
Time of use:

I received yesterday, it is still a little break, but I have begun to appreciate the quality.

Cot positive, the first of his precision and a remarkable spacialisation. The headphone looks pretty solid, and it comes with many accessories (semi-rigid cover that allows you to store everything in compartments, two cords, adapter jack 6.35-> 3.5 jack, two sets of foam, a CD that must take place CD running) He shakes the head well. For cons, the proprietary technology means that if you put the headphone backwards (left to right and right to left), the sound is high frequency impoverishment. It should also be careful to put the headphones (my ears are smaller than the internal space of the atria, I have to adjust to find the right position, but once well put, it's good)

I compared to 7509.
Nieau to the cost, the 7509 seems much more medium, after comparison, I would say that the sounds seem closer to the tape medium, compared, it appears from a pro 900 print width of frequencies, and stereo width of space also. The sounds seem more distinct from each other. Low frequencies give the impression of being much more present, the bass drums have low impact in the low growl, a 40 hz means EQUAL. What seems strange is that the bass seems more present and less occulting vis a vis the rest of her as the 7509. on the other hand, the sound seems drier, less rich medium, which initially surprised. After listening further, maybe the sound is altogether more natural, the voices are faithful, you feel the vibrations of the details of saxes synths.
The subjective approach being one thing, I then pass a test that I like to do, monitoring of singing. It receives more details singing, the more we come to adequately control the song. I once did this test with a Numark (vocals slightly wrong) the two AKG (vocals correct but hesitant) and 7509 which was at the time my best headphones (he got away with flying colors during the test, I leaving the feeling of precise control of the song). The Pro 900 also is doing extremely well, leaving me feeling even a finer control over the votes of head not necessarily obvious to control it.

What is it expensive! While ...
but what is it good! Lol
I truly believe that this is a good headphone. It provides both a quality vis a vis the bandwidth and space stereo, although at first it divert a little on this point (the extremes seem spacialisation go outside of the headphone). It is totally DIFFERENT from 7509, much less medium, unable to say whether the bandwidth is more or less flat as this.

Yes, I would do, but I hope to keep it long enough for me not having to ask
See the source
Did you find this review helpful?yesno
Cookies help us improve performance, enhance user experience and deliver our services. By using our services, you agree to our use of cookies. Find out more.