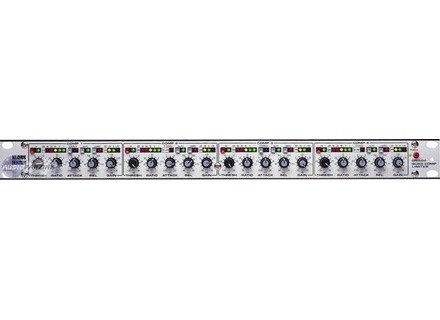 All user reviews for the Klark Teknik DN 504

Klark Teknik DN 504
4
I’ve personnally mostly used this Quad Compressor live.
It was old and looked used and battered, but it still worked wonder. It’s a really sturdy and reliable model! Up to par with the manufacturer’s reputation.

Its features can easily be found through your favourite search engine.

Very well-finished, especially considering how old mine was : it had been used for years and years but was still fully functional (LEDs, selectors and knobs – even though some of them are a little sunk inside…). It’s sturdily built, for sure! Its connectors are great too.

Soundwise, I found it made a great job in live performances.
It brings character to the vocals, allowing them to remain natural-sounding while sticking out in the mix. The automatic options for the knee, attack and release settings allow to set them on-the-fly before tweaking them more precisely, increasing the unit’s flexibility. It also makes it suitable for all users.

I never had an opportunity to try it in the studio or for recording purpose, so I won’t judge it but I’m not worried about its suitability in such circumstances.

What is sure is that you can really hear the setting changes, while retaining a great clarity. The kicks get thicker, the snares keep their proper tones.
I got totally seduced, and my current 01V96V2’s integrated comp sounds like a lightweight compared with it.

Getting four compressions of such a high quality for the price I paid it (a hundred euros for a very used unit): what more can you ask? I owned another rack with two BBE comp – no contest, the Klark was way better!

I only rate it 4 stars due to my own unability to judge of its qualities in the studio, but I have no ill to say of it. Please note I’m not a professional user, only a rather enlightened amateur, self-taught user.