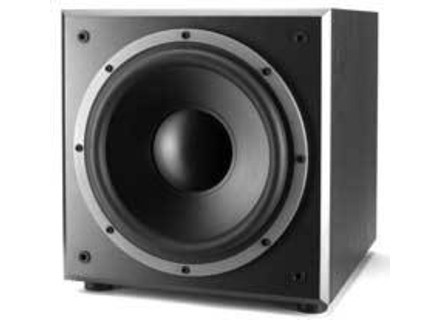 BM14S, Studio subwoofer from Dynaudio in the BM series.

Dynaudio BM14S
5
The BM 14s is a 14’ inch high quality sub woofer that packs a punch. If you have a good set of monitors then you will need to add this to them to get that really good low end thump. If you don’t have a good set of studio monitors don’t waste your money getting this because you will horrible mixes with bad monitors and the BM 14 . You can get a great master version of your songs and the bass in your songs will sound crisp if you use this to master them in. Your room needs to be treated though and have a carpeted floor of course. You don’t want to have this woofer sitting on hard wood with that bass bouncing off everything. These things are key with a good woofer in order for you to get a good sounding bass.


The sounds of the BM14 is great, and its second to known. I have only heard a few other woofers that can get you a great sound like this one can and those ones cost a lot more than the Dynaudio Acoustics BM 14s.


When it comes to picking a sub woofer for your mixing and mastering studio you should not take it lightly. Some people just think well as long as I have something that can put out bass I will be fine and I will invest in getting some really good monitors and leave the bass out or just get a cheap woofer for now it will be ok. If you can , go to your local store and play the same song in a set up with this woofer and in a set up without this woofer and you will hear two completely different things. So imagine how much different you would mix in the BM 14. It is top notch and must have if you can afford it.

Dynaudio BM14S
5
The Dynaudio Acoustics BM 14S is a high end sub woofer for use in your recording studio. The studio that I work at also has a mastering room on site, which is where this is being used. I don't think it would be necessary in any other place other than a mastering room. The sub woofer has a single 12" woofer and is active so you won't need any power for it. It's designed for use with other Dynaudio Acoustics monitors like the BM5's, but can definitely be used with any other set of monitors that you so choose. We have them up with the Studio Products Mastering Lab 10's in the mastering room on site here...

The Dynaudio Acoustics BM 14S is definitely the best sub woofer that I've ever heard. The amount of bass that can emanate from this thing is really unbelievable. It's a pretty average size for a sub woofer but really blasts out sound. A sub woofer isn't always necessary for all applications, but for mastering it definitely is and that's where I think the BM 14S is best suited as far as musical purposes are concerned. It's not really worth getting for mixing as you could get something a lot cheaper that would do the job fine for that, although if you're able to afford it for mixing, it would certainly do an awesome job.

If you're looking for the ultimate sub woofer for any purpose, the Dynaudio Acoustics BM 14S is it! It's the best that I've ever heard, having also used the BM 9S which is a set down price wise to this one. Having something like this is definitely a bit excessive for anything other than mastering or post production or something where you absolutely need to have those super low frequencies reproduced at a truly accurate rate. It's incredibly expensive which is why I'd only recommend it if absolutely needed. We have the BM 9S in our main recording room which is more than adequate as a sub woofer for that kind of use, so I'd strictly recommend the BM 14S for mastering...