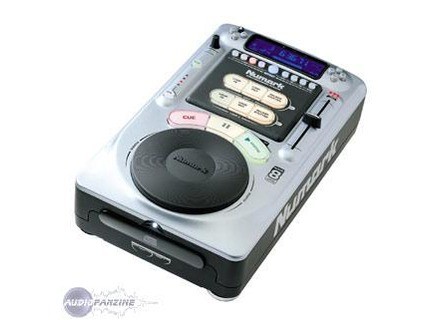 AXIS-8, Tabletop DJ player from Numark in the Axis series.

Numark AXIS-8
4
Overall pleased with the model, not the best cratch wheel to play with. Loop features are good

easy to use, the scrath isn't the best

works great with 2 and a mixer

Numark AXIS-8
4
Tons of features. Except... No Sampling. No wave-form display. No resistence or touch sensitivity on the scratch platter.

Sound is actually very good, except when you start key correcting. Should be paired with a transparent mixer that doesn't soften the sound at all.

Extremely easy to use. A miracle of ergonomics. Relatively light. Two and a mixer in a soft case with CD wallet can be carried by hand to a car.

I have had severe problems with these units during the entire 6 months of owning them. Sloppy internal design. Buttons wearing out. Inconsistent button &quot;feel&quot;. CD mechanism has failed three times. Occasional freeze ups, which can actually cause the other side to freeze, too. Numark's repair people are lackluster, though the senior people try to make up for problems if you ask them to. When the problem is their fault, they don't pay to pick it up, though. Make sure you actually tell them your concerns and what you'd like to see done to remedy the situation.

It can do things that no other unit can. I can have an entire, advanced CD djing system in a soft case, including my records. It looks great, and when it works, sounds greats. The software is upgradeable and now is up to the level of their new CDN-90. Just buy locally and don't put up with any quality control inconsistencies until you get two flawless sounding and feeling units.

fabloom's review (This content has been automatically translated from French)

Numark AXIS-8
4
The axis is the equivalent of 8 cdn90 Owner 'I am with just less memory cue point, I am so confident in principle.
2 perfect curls, three dpart to stutter, effects that apply to the bpm in the beatkeaper ds is not lost I can assure you that adchire!! mode scratch with 4 different modes seems good but what's missing is the touch: wheel that does not include the touch. I'm not too scratch so it's not important but must in this brand is the axis 9 which ale sensitive plate is missing from the 8. it is easy to use because everything is done intuitively VERY QUICKLY unlike fashion denon that are more complex so more hard use
MY OPINION? is the material the quality seems good but the dj shun because it is better to have the denon or Pioneer if you want to be able to walk lev mix in boxes or in bars dj. Now if like me you mixes in your room with a few accessories to get money to pay you your sound ... it will suit you! otherwise will take a look at the site where you will find www.scratchworx.com players cd scratcher of technics, numark, and Denon, Pioneer, tascam ... of the ball this site
Did you find this review helpful?yesno
»

Moulino's review (This content has been automatically translated from French)

Numark AXIS-8
4
I invested in a pair of Numark Axis 8 readers there is more than a year, and I'm delighted.
I never mix before that, I did not take courses either. it is these readers who have learned is that if the grip is easy! a child could use it!.
easier than the vinyl for the sequences, the player does not mean dtronnent the "cake" in scratch. The JOG is here because he gre apprciable with a great flexibility gambling effect, some synchroniss the tempo.
Résumé for a pro feel a little frustrated by the lack of some features and a touch scratch in a little rough, others will find their account. is a simple, reliable, convenient and efficient trs. a real toy!
Did you find this review helpful?yesno
»
Read the 8 user reviews on the Numark AXIS-8 »