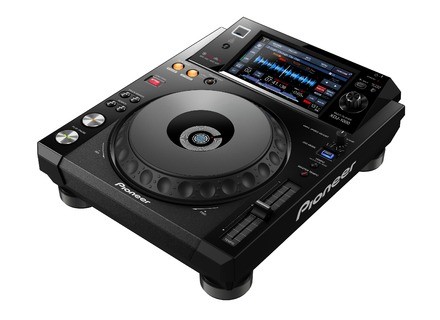 XDJ-1000, Tabletop DJ player from Pioneer in the XDJ series.

Pioneer XDJ-1000
4
Everytime market leader Pioneer releases a DJ player, we’re back into the same endless debates going back and forth... Well, I won’t feed that trend and try to give you my opinion, as neutral as possible

Let’s get into the context: a satisfied user of my CDJ-1000Mk3/Serato combination for years now, I couldn’t help being more than tempted by the CDJ-2000. Problem is, even with a rather important number of shows a year I couldn’t afford one of these at $1800 (a little lower now). Very disappointed by the CDJ-800 years ago, I wouldn’t even consider lower-end models from the same brand (CDJ-850 / CDJ-900), first because of their manufacturing quality, and also due to their features (I don’t care about an autoloop or loop divide, but hot cues

Don’t even mention controllers, makes me want to puke: a big, low-end plasticky thing with a lot of controls and lit up as a Christmas tree with professional-looking features that you actually never use in a live situation

All in all, when I saw this model Pioneer had released I wasn’t deterred by the USB-only mode (other manufacturers had done that long before), especially since my CDF weren’t fed by much else than Serato timecoded CDs. A bit circumspect about the touchscreen, I thought “let’s buy one to try it, and resell it at a good price if something’s wrong”

After a few weeks testing it in my living room, here’s my opinion on it: a real killer! Nothing to be critical of, I can’t compare with the CDJ-2000NXS’s USB part for I never used it but the software’s ergonomics seems quite close.
Touchscreen is very responsive, sound quality is flawless. Very satisfying! After thatn you have to get used to Rekordbox, which doesn’t work the same as Serato SL / DJ but hopefully I won’t have to keep the computer in front of me while mixing as all controls can directly be accessed on the player (thanks for that, Pioneer!).
Plus, getting back my loops and cues makes things easier!

OK, there are still a few cons:
- platter is not backlit
- no “pitch reset” control
- a lot of things can be done to the loops using the touchscreen, but to leave the loop jou have to use the “exit loop” control above the jog – so you tend to look everywhere for that control at the beginning :p
- the JOG’s resistance can’t be set (but it’s still rather soft)

As for its pros, value-for-money is quite good, even if Pioneer is making a nice margin and incites to use Rekordbox.

Published on 11/13/14
With the XDJ-1000, Pioneer removes CDs from the DJ setup so they’ll mix only songs stored on a USB drive.