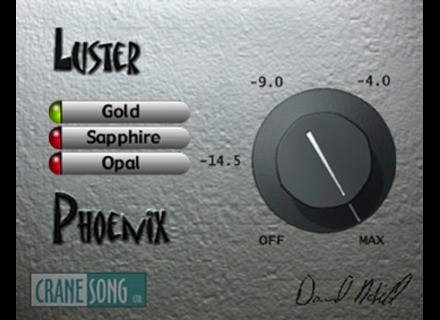 Crane Song Phoenix
5
I didn't have any problems at all installing the Crane Song Phoenix plug-in bundle as the whole process was quick and pain free.  This plug-in in bundle contains five separate plug-ins, each of which is aimed at making your digital signal sound a bit more warmer.  Their goal is to emulate the sound of a magnetic tape machine in order to spice up digital signals.  The interface of each of the plug-ins is really straightforward as most of them only have a single knob to set the level of processing that you would like.  I've never seen the manual for the Crane Song Phoenix suite, but it is easy to figure out and I don't think that one is necessary.

Since there isn't much going on with each of the plug-in in this suite, everything runs quite smoothly.  I've never had a problem thus far with running as many of these as I'd like at a time and I attribute that to the fact that these aren't complicated plug-ins.  I am currently running the plug-ins on a Mac Book Pro that has a 2.2 Ghz Intel Core 2 Duo processor and 4 GB of RAM.  I run the plug-ins in Pro Tools LE 7.4 that runs with a Digi 002R audio interface.  As long as you have a sturdy system that runs pretty well with your sequencer and current plug-ins, I can't imagine that you would have issues with running the Crane Song Phoenix suite of plug-ins.

In the short time that I've been using the Crane Song Phoenix suite of plugs, I've really grown to like them.  I'm not a believer in the idea that plug-ins in the digital domain can sound too much like analog sounds, but these do as good of a job as any can do.  I always try to get the warmest possible sound with my analog gear rather than trying to use a digital medium to do so as this is always the best option, but when this is no longer possible, these plug-ins come in pretty handy.  They aren't all that expensive and will do the job pretty well, although I was skeptical to being with.  Overall, the Crane Song Phoenix plug-in suite is a great set of plug-ins for warming up your sound when you are doing everything inside of the box of the digital realm.