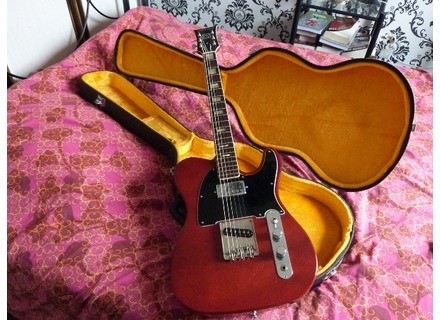 Ampeg Heavy Stud GEH-150
4
The heavy stud GEH 150 whole range of Stud also has remained the catalog for two years from 1973 to 1975.
The range consisted of two model shaped SG guitar and Telecaster any two bolt-on neck and a bass model with two types of precision configurations sleeve, long and short scale.
The stud range was built in Japan, originally designed to replace the ADA series (the famous "see throught body" created by Dan Armstrong) stopped due to financial disagreement with Mr. Armstrong.
The heavy stud GEH is at the top end of the stud.

As so often in the first half of the 70&#39;s for guitars made in Japan, the body is kind of pancake, with particularity, a thin slipped in the middle of the body to sustain supposedly improved steel sheet ... I do not know not if it is more of an argument or other marketing, but nevertheless, it is recognized that the sustain, the beautiful has it in spades!
For the curious or collector, the firm Martin (yes, that of Nazareth) sold under the Sigma brand, the same model manufactured in the Tokai plant. The Ampeg, it was built in the Magnavox plant.

Well, it&#39;s time to talk about the guitar itself, so it&#39;s a telecaster whose body is made up of slice of unidentified wood, 21-fret neck is maple with GEH for a rosewood fingerboard adorned with pretty pearl blocks as a key marker.
The microphone configuration is H / S with a humbucker in the neck and a single coil at the bridge, 4-ply pickguard rather classy, ​​the arrangement of controls (volume / tone) is TV type and kind gibson switch (toggle switch). be noted that the jack is located on the control plate as many low budget version of the time and not on the edge of the guitar.

The neck is thin and flat, it resembles a round of SG. The head is of type 3 + 3, rather large with mechanical fairly robust (they are 40 years old and still provides as the first day).
The bridge is a three bridges but the strings are non-through.
Vernie Poly, but not too "protective matrix", thin and well applied, pleasant to touch.

This beautiful TV is therefore not a high-end model, but rather a cheap version of the U.S. reference, but it must be recognized that it is very well built, the finishes are done with seriousness, the microphone are good quality (Maxon), in short, good cam and comes with a very nice hardcase.

I would put 7 because the pancake body and non-through strings, but it&#39;s really for my pain in the ass, the care taken in the manufacture deserve 9

The handle is very nice, the real success of the guitar in my opinion, late but not too flat and I love the food heats. the patent is very soft, glides well, a very comfortable handle.
the ergonomics of the guitar, well ... it&#39;s a TV ... a kind of board without cutting kro for abs or inclination for comfort right arm ... not anything like that, just a board I tell you!
Access to acute is not bad at all, the junction body / neck is made with care, and given the smoothness of the last round frets are easily accessible.
Always to emphasize the similarity with a handle SG, Gibson typical reinforcement of the seventies between the head and the handle is also present here.
rather it not get a good sound easy ..... it does, but it&#39;s not that simple.

Due to its micro configuration, this shovel has two faces.
the humbucker is round, also with a very fat overdrive ass, a very appreciable level of output, I have not measured the meter but not sending the wrong guy.
for grain, it is not far from one of the 490 gibby home.
The bridge pickup on the other hand, it is just the opposite, dry, very dry, an acute sound, not a bit fluffy, but not yucky output level.
for grain, I would very country where it is clear, attacked by an OD, it becomes very acidic, sharp as a razor limit.
and when you mix the two together, we are left with the not so distant ancient ADA 6 plexi .... I know it seems a little far-fetched, it prevents even my champion 600 with TS9 had the guitar accents "Get yer ya ya&#39;s out."
enjoyable!
After that, it is not as immediate results, you have to fight a bit with the beautiful, giving kicks on the ropes, just attacked with determination, aggressiveness almost ... yeah, not really the ideal guitar for beginners, but when we took the shot, we had a hard time stopping.

Here, it just arrived at home, so yes it is still fresh, but the first hours of the game often decisive.
comfortable, a look that I find very classy like any Ampeg trouve.J I &#39;ve also owned in the past a very beautiful too AMG1.
Sounds full of character, Roar of good quality when we switched the box to drive in short, a real good guitar.
This guitar is not very expensive, for against relatively rare, little has imported at the time by us, if you want one, you need to arm yourself with patience.
But not the holy grail of the Telecaster, it gives a lot, and it&#39;s not bad.