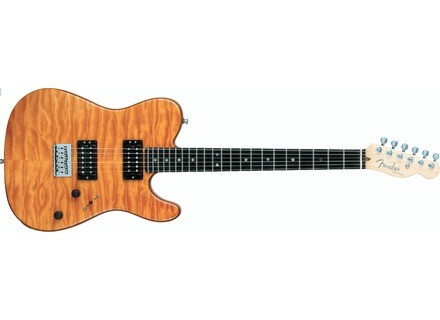 All user reviews for the Fender American Deluxe Telecaster QMT

Average Score:4.0(4/5 based on 1 review)
Audience: Advanced users Value For Money : Correct
Not satisfied with those reviews?
Our members also liked:

I’ve played this fender qmt tele on two amps (rectifier Boogie and Jcm 800 (1982)), mainly for metal and prog metal up to math core for those who know.

This guitar reminds me of the fender tele flathead, those which inspired the "Jim root" tele models.
This guitar has a great neck, it’s really its main asset, big kudos for its ultra-fast neck ala 1980s jackson/charvel with jumbo frets with a finish that’s here and then better to feel than to look at – lol – but no real catastrophe, it’s just a bit disconcerting.
The guitar is very stable and stays very well in tune with its auto-locking tuners, the nut is well conceived and the ebony fretboard is a real pleasure.
The electronics is where I find its real flaws as the guitar’s concept really doesn’t match itw woodwork. Two splittable HBs to give them a wider range (to play everything heavier).

In theory it should work, the idea is great but in the end the result is not up to expectations. It sounds like BZITBZIT, very un-natural but I can’t find the exact word, it remains in the spirit of whichever style you want to plan but it still sounds cheap and while the pots look nice they’re not easy to use as they lack adherence – so they ain’t much efficient.
While the push-pull system is a nice concept (I’m still a bit frustrated), for a three-position split there’s no problem, classic, very efficient.

The guitar’s body has a very nice shape with the same contour as the Jim Root model and the same enhanced access to high notes , another kudos (perfect finish).
The one cons of the body is that it doesn’t resound enough to my taste, the sound spectrum lacks width. The guitar lacks expressivity for nuance players.

All in all, this is essentially a metal-oriented guitar. That’s its true nature with an unbelievable ease of play, just a nice jigsaw away (lol) to please high gain addicts.

To me, this guitar is great but it takes changing the pickups for ametal set such as Blackhawk, EMG 81/60 or Seymour Duncan Blackout... Only then will the electronics reveal its true potential for what it does best : WAR!!!!!!!!!!!!!!!