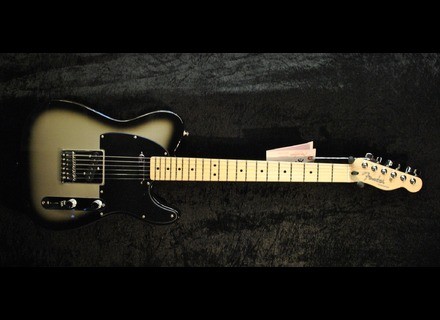 Fender FSR Standard Telecaster Silverburst
3
Primarily a singer, I've been playing guitar for about 10 years, been in a band (drummer!), and have continued to record and play with other musicians on a non-professional basis. My styles range from folk to hard rock, with heavy power-pop leanings -- Big Star, not Green Day.

As part of helping my friend shop for her first electric guitar, I played two different copies of this, Fender's $370 Mexican-made Telecaster, at Guitar Center on Sunset Blvd. and Sam Ash on Crescent Heights in L.A., for about an hour at each location.

The two guitars I played varied wildly. The Guitar Center Telecaster was lively, complex-sounding, and responsive, with especially impressive left-hand feel, given that I usually play Gibsons exclusively. The Sam Ash Telecaster felt dead, heavy, and gave a caterwauling sound I detested. And I was testing on identical Fender Frontman amps.

The inconsistency in sound and feel between the two guitars is enough to make me suspicious. It certainly would be a risky proposition to buy this model on the web, without actually testing it in person. The Sam Ash Telecaster felt as bad as my first electric, a Squier Stratocaster that started falling apart about six months after I'd first bought it.

The aesthetics, woods, finish and hardware on both Telecasters were all right. The Sam Ash Telecaster, again, felt like dead weight, but the Guitar Center one was very comfortable. So again, quality seems to vary wildly in this range.

I love the Telecaster sound; it's nearly impossible to get that tone without actually playing a Telecaster. So I took my friend's shopping trip as an opportunity to try out the Telecaster extensively. As it turned out, if I didn't already have several guitars and had the money, I would've picked up with Guitar Center Telecaster without hesitation, while the Sam Ash Telecaster was uninviting to play, uninspiring, and reinforced my reservations about lower-end Fenders. My advice would be to never buy a Mexican Fender Telecaster without playing it. Don't buy off the web or eBay; go to a store and try as many as you can. You can probably talk store prices down to web prices, and you'll be much more comfortable in knowing what you're paying for.

Fender FSR Standard Telecaster Silverburst
4
I got this guitar as a backup for alternate tunings. I purchased it at Guitar Center for $300...it was a pre-christmas sale.

Well, first and foremost is the sound. While it is much more mellow than a Strat, it can definitely hold it's own on stage and recordings. It has the classic Tele twang. I actually am beginning to like this more than my Les Paul, which was 4x as much money. Another thing that I like about this guitar, is that not many people have them. It seems like everyone and their mother has a Strat, so this is a nice change.

Well my main comlaint about this guitar is the hardware. It has problems that the American series just doesn't have. The input jack is really loose, so the chord constantly falls out. Also, the tuners are horrible. I replaced mine with locking tuners immediately.

Like I said in the last paragraph, the hardware is sub par. I expected a bit more from Fender, but then again, it is just the standard series. Other than that, good looking finishes, GREAT necks...I am in love with the satin maple neck.

This is overall a great guitar. I love the bright, but mellow tone, the finishes are beautiful, and the price is definitely right. Do yourself a favor and but this guitar, you won't be dissapointed.

Fender FSR Standard Telecaster Silverburst
4
I picked this up at a local Guitar Center in late 2003. It had a small scratch on the side, dropping the price to 300 dollars.

I love the feel of telecasters. People say it's a country guitar, but it can be used for almost any style of music. I rock out with Led Zeppelin tunes, and I play a lot of Allman Brothers tunes on this baby. I love the maple neck, because it is fast. The neck pick up has that muddy sound great for playing blues. If you crank up the overdrive and put it on the neck pick up, it has a great Zeppelin tone. I also like the look of the guitar. I can see myself in the finish! It sounds and plays great.

It could be a little lighter. It also picks up a little too much noise when next to other electronics. I guess that's what i get for using single coils, but it could still be better. I would also like the neck to be set, but for the price... whatever.

Overall, the finish and construction of this unit is great. Like I said, I would prefer a set neck, but it is fine. It is also very thick and heavy, although I prefer something lighter, I guess it gives it a good tone. I like the neck construction and the headstock, as I've always liked all the tuners facing me.

If you play slow, muddy blues or raging Zeppelin music, I would reccomend you pick this baby up. I would suggest going for something with a set neck though, like the American series.

Fender FSR Standard Telecaster Silverburst
4
I'm very happy with guitar, it cost $500 CND and I bought it from L&M music here in Saskatoon Canada. The guitar its self is a good guitar, it takes a little breaking in.

when it comes to the sound, the bridge pickup is definetly the stronger sounding one, with alot of twang and punch, being played through a good amp such as a Vox it sounds awesome and sublime. The guitar feels lovely when playing the neck is perfectly shaped, it retains most of its width throughout the entire length. The Lower frets are a little wide, but it just takes adaptation.

The neck pickup is a different story, it has a more mellow sounding tone, that has less volume and in my opinion is weaker. The sustain is also a little lacking, older Telecasters had brass saddles, which probably give them more sustain, if it was just a little beefier and more loud with the neck pickup, it would warrant 5 stars.
The only other problem is the neck, the maple neck feels lovely on the hands and you can really make it play wonderfully. The only problem is that maple is a fairly soft wood, so the neck dents easily. Be careful with it.

The neck is solid maple with a rosewood skunk strip down the center of the back of the neck, the body is alder, and painted agave blue with a white pickguard. This guitar is a heavy thing, its body is very thick and it definetly has the appeal that the original telecasters had with its boxy feel and apperance. The construction is solid, and it definetly feels like a gun sometimes considering how heavy it is.

This is a good guitar and definetly worth the price. I think it depends on the music you play. I myself play stuff similar to the Smashing Pumpkins, June of 44, Sonic Youth, Big Black, and others. And while it can handle a fair number of their songs, it cant master many of them. Im personally up for changing my pickups when finances allow. But if you like to play blues, classic rock, punk or country, this guitar is for you.

This review was originally published on http://www.musicgearreview.com
Did you find this review helpful?yesno
»
Read the 10 user reviews on the Fender FSR Standard Telecaster Silverburst »