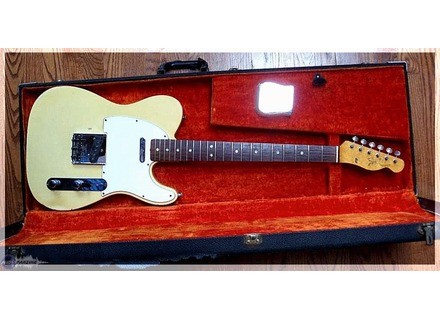 Telecaster (1966), TLC-Shaped Guitar from Fender in the Telecaster series.

Fender Telecaster (1966)
5
This is a fantastic guitar, one I had the fortune of playing only once when recording an album, but I got used to it very quickly. It has a rosewood fingerboard, and a standard Tele bridge. It has a maple neck and body. There are 21 frets, two knobs (volume and tone), and a three-way pickup selector switch. These are all horizontally lined underneath the bridge. I like this feature because you negate the possibility of hitting the switch while strumming.

The last fret is pretty easily accessed, thanks to the cutaway in the body. This is a classic feature of Telecasters even today. The sounds that come out of this thing are pretty great, I don't think it's going to take anyone too long to find something they like unless they have a really bad amp. The guitar itself is rather light, it's certainly not difficult at all to move around with. On the guitar that I played, the drivers were very much stable, and everything seemed to be in working order.

I really like this guitar when used with a Fender Twin. It's got a great amount of versatility. The bridge pickup is great for rock tones, it's powerful and bright without losing too much low end. I believe this is because of the position that the pickup is in, which is slanted slightly, with the bottom closer to the bridge. It really works great with an overdrive or distortion pedal. The neck pickup, meanwhile, is a rich, deep, solid sound. This is a really good sound for smoother R&B playing, Blues, or even some down-home style rock playing. The middle selection, the one between pickups, isn't as useful to me, I don't think it has enough character. But it doesn't really matter considering how great the other pickups are. I also really liked this guitar with a Marshall, it definitely was more rocking with the gain, although the clean sound was less savory than the Twin.

I really can't say much more about how this guitar is. It's so solid that it's hard to find them for a reasonable price. This is a long time saving up for most people, but I'd say that it's worth it in the long run. With proper maintenance, you will never tire of this thing.
Did you find this review helpful?yesno
»