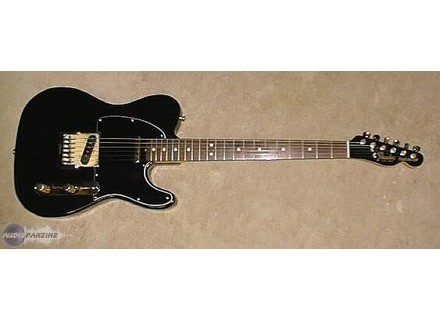 
3 user reviews
Find it in the classifieds starting at $49 Avg used price: $49

Fender Black & Gold Telecaster
4
Fender telecaster is a fun little guitar that has a great sustained but a unique tone to any other guitar that you've ever seen or heard. It retains that clean Fender brilliance and sparkle but it has its own dynamic frequency response very different than any other Fender Stratocaster or other instrument. It's a very light and airy guitar that has two single coil pickups, a volume control knob, and a tone control knob. You also get pickup selector and that's pretty much it is farce features go. The hardware on this guitar is just horrible. I don't like gold hardware so I am a little biased towards anything other than gold. The black works on this guitar though.

The Fender Telecaster is a fun really ample for the clean tones and moderately overdriven rock tones. It has that nice style and feel that is very comfortable to play single notes or solo rigging. It has a very thin neck compared to Gibson Les Paul or any other Gibson guitar and not quite as thick as a Fender Stratocaster neck. It's very comfortable as you go up and down the frets of the neck which makes it very pliable and easy to do solos and single note playing

If your country player or any rock player this is a great guitar because as a great sustain any clear note separation as you strum the guitar. They don't excel at drop tunings or extremely saturated gainey guitar tones. These guitar sound great with effects or modulations with a light overdriven to clean amplifier. Certainly you can play any hard rock setting but you're not really good to get the tones you would hear many hard rock players achieve.


You can find guitars pretty much anywhere you look for Fender instruments. They are anywhere between $800 and a couple thousand dollars depending on which reissue you are looking to get. Most of them are around the range of about $900 or so. There are a fun guitar and they're nice addition to any guitar collection that you might have. I recommend these for recording were getting as well because they give a good sound and a different tone than any other guitar you're going to use. But don't buy the gold hardware it just looks silly on this guitar.
Did you find this review helpful?yesno
»

Joe-Rhys's review (This content has been automatically translated from French)" it sends the wood!"

Fender Black & Gold Telecaster
5
this guitar is a U.S. model made from 1981 to 1983.
the one I had the pleasure of playing with dates from 1983 and was amended by the addition of a single coil in the middle of the body as a stratovolcano.
I still states that the guitar I played also had the original bridge pickup replaced with a seymour duncan hot rails but does not diminish the incredible sound and fit inside the beautiful!
for features that I found on the blue book of guitars; hardwood body (the guy who had told me that it was ash, normal is the wood of the original Telecaster!), maple neck rosewood fingerboard 21 boxes with beaded pins (d Besides, what's great is when rosewood is grown old;! missing pieces in here and there and it is cracked), the head is black with the "fender telecaster" logo golden easel is solid brass and the most beautiful effect, three microphones (see why above), includes electronics; button master volume, tone, 3 positions and there to split the hot rails, switch 2 positions, the mechanics are golden.

the handle was really nice.
ergonomics is that the Telecaster; it's simple, tapered.
weight is a challenge to my shoulders; it's heavy, very heavy watch! but here is what makes his sound!
access to acute is the traditional Telecaster; it is good and that's all!
sound, my son, here bangs!

the test was performed in my current amp; ie a Fender Hot Rod Deluxe III Limited edition black & silver (see my other test benches!).
desuite as you say that it's without concessions!
already, the weight of the Telecaster makes me say at the outset that this guitar trunk; not contradicted print when plugged into the amp!
sends the ball here!
it is not an Ibanez RG with DiMarzio pickups either!
it's really dynamic, expressive, and when I clicks saturation is really rock, rock and rock!
everything going on; the rhythmic hendrix, blues, hard rock .... this guitar reacted very well to pick favorites.

I had the happiness to try it for one afternoon and it was really fun!
I tried many guitars before it (see my other test benches!) and here I am always pleased to play an instrument that weighs a certain weight and that the respondent when we get it in bacon! !
this guitar part, for me, the pantheon of guitars that have "a soul."
what I liked most; sound in general, the addition of micro hot rails, the black and gold, fender slamming sound, the soul of this guitar!
I did not like; Therefore the weight of the instrument.
I found this guitar worth the investment; this is a good guitar for as long as one attention.
I like the sound of guitars that have lived; this one smelled of smoke, rock'n roll and sweat! ah! ah!
Did you find this review helpful?yesno
»

jufar's review (This content has been automatically translated from French)

Fender Black & Gold Telecaster
5
It's actually a Fender Telecaster JAPAN, 1989 (the same as in the photo above)
typical configuration of a tl at the microphones and the bridge (3 bridges)
a rosewood handle, but it is completely dark!

She has a great touch (I'm a fan of tlcaster ...)
trs I feel comfortable on it.
you branches, a ring, a bandmaster or twinreverb .... foot

So I am about the c..
japan is certainly a scratch but this 15 years and feels she has aged well, it really sounds the tl "claququot; acute microphone is good (obviously a little less than my t the US deluxe ...) but I especially like the quality of its micro severe (more than US's my favorite ...) which makes it a very versatile tlcaster.
I thought of changing the pickups against US tl of standard fender but I think it will keep its microphones! ... single point: it larsen easily.
for the style that I made, it's really IDAL! (Trip-hop, rock)

I am satisfied with the trs, she look fabulous! (Tl is a rare!)
if you find one, go for it ...
Did you find this review helpful?yesno
»