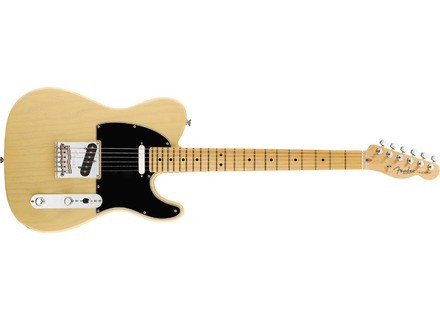 Fender 60th Anniversary Telecaster (2011)
5
One thing I love about the Fender telecaster's it's brilliant clear tone when you're running a lot of effects and a lot of game. This guitar really brings out the clarity and note separation to which many other guitars are not able to pull off. It has nice clean spanky tone where you can hear each note individually. It has a great feeling a great response and the balance is pretty good as well.


I really like the tone of these guitars because it has a brilliance and fun playability to it. The necks on these guitars are a little thinner than the Fender Stratocasters and definitely a lot better than a Gibson guitar that I've ever played. It's not a bulky neck but something more along the lines of the Ibanez neck but not too thin.

This guitar sounds great in pretty much any application that you put in. Whether you're running a fender clean amplifier with a load of floor pedals or you have just a few pedals and a medium or high gain amplifier such as a Mesa boogie or Marshall amplifier this guitar will sound great in any setting. For those instruments there really provides the user or the guitar player to really put in their own style and feeling without masking anything. The pick up some these guitars are very good so I suggest swapping those out for something more boutique or just a simple Seymour Duncan single quote pickup.


These guitars to be found online or pretty much in any guitar retailer around the world. But not very expensive for an American built guitar and right add around $1400 you can have this guitar to bring home with you. I highly recommend this guitar pretty much any guitarists out there because he adds a unique tone to their guitar collection or even your main instrument for digging or recording.

Fender 60th Anniversary Telecaster (2011)
5
To celebrate the 60th birthday of the Telecaster Fender has come out with a special edition that blends some old features with new features to make what arguably is the ultimate telecaster. The guitar features an ash body with a thin nitro finish. You can see the grain of the ash under the finish. It has a classic black telecaster pickguard and 3 way switching with volume and tone controls. The tone control is a no-load tone circuit where you can completely take the tone knob out of the circuit. The pickups are from Fenders American Vintage series. The neck is a one piece maple neck with a 9.5 radius a little flatter than what an old telecaster would have. The fret edges are nicely rolled for a comfy feel.

The one piece maple neck comes with 22 medium jumbo frets on a 9.5 radius. This makes the guitar play more like a modern guitar. These frets are a lot bigger than what you would have gotten back in the 50s and the fretboard is also a lot flatter than what you would have gotten. The neck is a more modern C shape and this with the rolled edges mean you can really wrap your hand around and get a good feel on the neck. The ashtray bridge does not have the sharp edges to it like an old tele would have so it is much more comfortable for your picking hand. The bridge also has 6 saddles for adjustment different than the 3 you would get with a vintage tele bridge.

This telecaster has a really big sound thanks to the good pickups and the no load tone control. The no load tone control does a trick that many guitar players were doing over the years. The players modified their tone controls to at the maximum setting act as if there was no tone control in the circuit. When the tone knob is maxed on this guitar it is like there is no tone control. Most guitars will sound a lot better and more powerful without a tone control. So with this guitar you get the tones of a tele with the tone control on and without it because then the signal has less resistance inside the guitar. It is going straight from the pickups to the volume and out to the jack. Because the tele is naturally a bright guitar you may need the tone control sometimes to get bluesy or jazzy tones and this guitar can do those tones well. This guitar also does the traditional tele stuff great. It has all the great twang you would expect with a telecaster.

This is a great tele with an old style finish and modern style playability and a powerful tone. I wish all guitars came with a no load tone pot. Its a great option to have the power of no tone control in the guitar and the versatility it gives. Fender threw some great parts on to this guitar. If Fender cut 90 percent of their models and just made 1 Strat model and 1 Tele model like this I am sure they would sell just as well. If you are looking for a Telecaster that combines old school looks with modern playability and hardware this is a good guitar.

The handle is a wonder! The softness and absolute grip but requiring a good technique because it forgives nothing.

It is a bit heavy (compared to an older model that I had) but very well balanced.

Access to the treble does not seem difficult to me but I do not have big paws; it is suitable for solos.

The sound is great, soft, aggressive, round, warm, with incredible sustains.

Fender single coil pickups with a dynamic sound and "vintage". In short, the sound of the Telecaster!

I learned to play on a Telecaster dated 1968 but pourave I loved and which I was playing Metal. It was my reference to it.

With this, I discovered "His Fender" (Telecaster), the clear, clear, clean, clean, perfect. It will be my guitar for anything that is not Metal. Infinite perspectives of compounds.

The sound distortion has nothing to do with KRAMER or BC RICH with double windings and suddenly I deduced that it was not made for this use.

In his clear is absolute bliss! It goes from its soft, mellow sound aggressive and powerful. Rock, Funk, Blues, Country, Ballad, everything goes for the best!

A remake? Without hesitation and even pay twice the price that I paid.
At this level of quality, it is the immediate nirvana and an investment for the long term! !dropoff Window

I played on a Telecaster for 18 years. It is an "emotional" guitar. I use it recently (March) but I play every day with.
This is my precious guitar (my precious ...

Bought used 600 euros instead of 650 after a quick negotiation, I consider it a great deal. A small shock on the lower body (skipped painting I repaired myself) and a light on a corner of my head that I had not even seen for both until the the seller do notice me, it was the deal of the century unexpected!

Given the quality of manufacture and its sound quality, pay more seems justified to me especially after comparing with Mexican and more with Squier.

I love his line.
The former was black with a white plate, a face eternal imortalisée by Francis Rossi and updated today by pure metalheads (JIM ROOT, JOHN 5)) that says it all!
The news is cream with a black plate, I think it throws less but ... she's beautiful! !dropoff Window
Softer!
More KEITH RICHARDS / TOM MORELLO!

)dropoff Window
Did you find this review helpful?yesno
»

Qill's review (This content has been automatically translated from French)" Blondie"

The sound is very clean, has good dynamic the twang is great, it's creamy, sweet, round ... the handle with the string set in a small 9-42 request accommodation for those who come from around Gibson, once you have the beast well in hand there's way to do this really fun, with a drive to TS9 Butt plans to Stone, Kravitz, Black Crowes ... pffff likey a pure, clean mode with 65 Fender plans to Buckley are mourned ... the look gives the impression that this is a shovel Vintage and yet it is not, it has microphones American Standard (contrary to what one can read on some site), which are normally quite versatile microphones see modern

I was waiting for its release since the announcement of NAMM and as soon as I saw it in stores and taking with me the first notes were good, love at first sight, I went with ...

Since I have put him a Fender Original Vintage kit is its just the seventh heaven, the interior is designed to put a double in the neck position for those interested
The only downside is the paint which is painted with very fine and suddenly it is highly sensitive to poc, every little fart is a hole directly
But no regrets if the only level that can be replaced the look and sound this is her big sister the 52 Vintage I also love