With a wealth of experience repairing instruments, Leo Fender had a simple philosophy when he started out: he wanted to create a new instrument using parts that were easy to replace. That's how he invented the bolt-on neck while all others used a set neck. It might seem obvious nowadays, but this innovation was a real revolution for all instrument manufacturers.

The early version of the Telecaster saw the light of day in 1948, but it was named Broadcaster. However, the registry office rejected the name Broadcaster in 1950 and its creator renamed it the Telecaster. Gretsch, which was based in New York in those days, introduced a drum-kit range called Broadkaster the same year. Gretsch considered that changing a "K" for a "C" was not enough and started legal proceedings against Fender because of the fraudulent use of the registered name Broadkaster. Fender had to give in and rename his baby... Telecaster. The Telecaster became the first solid-body electric guitar in music history to be sold in very high quantities, followed by its younger sister the Stratocaster in 1954. The Telecaster was presented for the very first time at the Chicago NAMM Show 1951. The retail price without case was $189.50 (which would make for around $1,650 today). The first Telecasters are usually called Black Guard by collectors because of their black Bakelite pickguard (Bakelite is the ancestor of plastic), which made a great contrast to its pale skin.

The Youngest Member of a (very) Large Family... 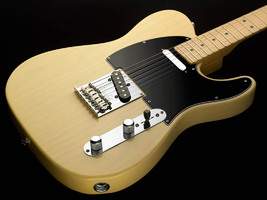 Fender decided to take the best of its experience and traditions in order to celebrate the 60th anniversary of the Telecaster by presenting this brand new model MADE IN USA. The 60th Anniversary Limited Edition is sold with a black, rectangular compression-molded SKB case with the Fender logo. We would have preferred a retro-style tweed case for the same price, but cold soulless plastic is trendy nowadays. On the other hand, in order to mark the event, Fender packed the case with many accessories including a guitar strap with the Fender logo, a cable, an Allen key to adjust the truss rod, a soft cloth, and a user's manual (see below).

First of all, let's have a look at this famous nitrocellulose lacquer. The reflection of light on the pale lacquer is just sublime. The thin layer of lacquer lets you see the grains of wood — you can even feel them when you press your fingertips on the soft skin of the beauty. This lacquer-type was widely used by Fender in the 50's and the 60's before it was replaced by polyester-based paints that are much more resistant, but also much thicker thus altering the wood resonance. In order to satisfy the expectations of demanding users, and following the rising trend for more authenticity in our society, instead of synthetic and cheap materials this lacquer-type was first reintroduced by Fender with the '82 American Vintage Series. Ever since, instruments from Fender's Custom Shop have been using it. This lacquer-type is special because it must be applied in very thin layers. The result is a better sound spread thanks to better wood vibration. The only problem is that this lacquer is softer, which also means much more delicate. It is also more sensitive to shocks, pick blows and especially temperature changes. Like most materials, wood is very sensitive to climatic changes: it will expand and return back to its original shape depending on the environmental temperature and hygrometry. That's why I recommend you to avoid prolonged exposure to sunlight and abrupt temperature changes, which can age the hue of the lacquer pretty quickly and make unrepairable cracks and splits to appear. Such reactions are mainly due to dramatic temperature variations. So, avoid changing your instrument from a very cold room to a very warm one if you want your Telecaster to remain young! Another important precaution is that you should avoid guitar stands with vinyl-based, plastic-based or synthetic rubber-based protections, which could leave permanent marks on the lacquer surface. We recommend you to follow the maintenance and storage instructions in the user's manual you'll find inside the guitar case.

The two-piece body is made out of ash-wood, which is well-known for being relatively light. The body is made of two parts glued together. The wood grain looks nice without being wonderful. It can be seen very clearly under the half-translucent White Blond lacquer applied in very thin layers. The post '66 type ferrules are not stamped on the body of the instrument. Since they are not glued to the instrument, the ferrules tend to come out of their housing every time you change strings. A small drop of glue will help keep them in their position.

The neck (25.5" scale length and 9.5" nut width) has a modern C-shape. Neck and fingerboard are made out of one single piece of massive maple with 22 medium-jumbo frets. The headstock is equipped with Deluxe-type staggered sealed tuning machines. The guitar is sold with .009-.042 Fender® USA Super 250L NPS strings. A thick glossy polyurethane lacquer was applied to the fretboard and the headstock. On the rear side of the neck the lacquer is mat and very thin. The handling is very comfortable both for small and big hands. The neck feels very pleasant, which is one of the main advantages of the guitar. The fretboard has black dot inlays. Originally, the truss rod nut the of the Telecaster was accessible from the neck heel. To adjust the curve of the truss rod, you had to remove the pickguard to access the truss rod nut. It was really annoying. Only one solution could make the adjustment more convenient, quick and precise: access from the headstock, which is usually the case for instruments made in the USA and in Mexico (except for the Classic Series). By the way, this neck uses a special Bi-Flex truss rod system (invented in the early 80's), which makes neck curve adjustment easier. 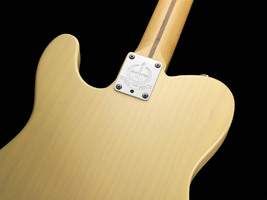 The hardware has a perfect chrome finish — in the best Fender tradition. The guitar is equipped with a special neckplate that states that the Series is limited. The American Standard-type bridge is made out of stamped brass. It holds six steel saddles already used on Thinline II Telecasters and Stratocasters. These saddles are perfect for precise string setting and tuning. However, they don't produce the same twangy sound as the three brass saddles on the original versions. This innovation alters noticeably the frequency response of the instrument if you want to get the sound of a '52 American Vintage. 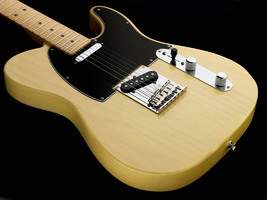 The electronics is very simple. The chrome control plate features two 250-kOhm solid shaft potentiometers (one for volume, the other for tone), a resistor and a 22-μF capacitor. The vintage-style spring toggle switch offers three different pickups combinations: 1 = bridge; 2 = neck+bridge; 3 = neck. The plastic Barrel-style knob on the toggle switch is the same as the knobs used between 1950 and 1956.

Even if the Telecaster has a very typical tone, it's always astonishing to hear the sound differences between several instruments, although the electronics in this guitar is extremely simple. Both pickups are single-coil pickups from the American Standard Series (not from the American Vintage Series as you will read on some product spec' sheets on the web). You'll get exactly the same pickups as on the American Standard Telecaster. And, just like with that series, you can adjust the height of each pickup using two screws for the neck pickup and three screws for the bridge pickup. We didn't notice any hum or unwanted noise even at loud volumes. The sustain is excellent. The bridge pickup produces a very well-balanced tone and doesn't sound sharp, allowing the guitar to find the right place in very different music productions. I was fully seduced by the bridge pickup (pos. 1), especially in crunch mode. Striking strings very close to the saddles, you'll get this very sharp sound typical of Albert Collins. On the contrary, the tone of the bridge pickup is very soft and smooth. Combining both pickups produces a powerful tone with very contoured mids because the three original saddles were replaced with six saddles. Remember the typical Stax sound with Steve Cropper's Telecaster?... Suffice to say that with this guitar your sound palette can only be richer.

Here are some examples recorded using a Peavey Classic 30 and a Mojo GTM stompbox for distortion.

It is important to remark that this guitar shouldn't be considered as an exact reissue of the original Telecaster. It is a tribute incorporating some major innovations that came to be in the 60 years of research at Fender. We could even say that this guitar isn't but an American Standard Telecaster with a special Blond finish to mark the occasion. After so many years in the market of musical instruments, the Telecaster is still a very influential electric guitar and still inspires many competitors... Don't put your hands on a legend if you're not sure you want to buy it!