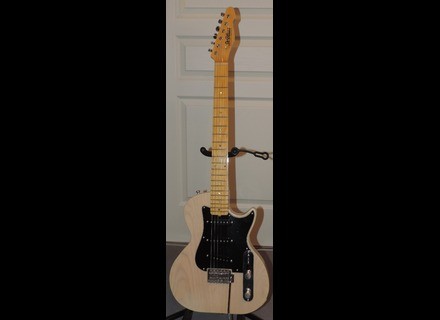 tchibeck's review (This content has been automatically translated from French)" Amazing .. She does it all!"

Saint Blues Bluesmaster III
Single guitar (as I would not have found someone with the same model), it dates from 2006, the violin parts are Korean and American assembly Memphis.
It has 3 single coil pickups, like a strat, a vintage vibrato, like a strat, an electronic plate Telecaster, but with a 5-way switch.
Volume and tone, typically there is a Telecaster (see photos)

The neck maple neck is typically that of a Telecaster-like.
21 frets semi-jumbo, I do not know if the nut is bone or plastic but it does not catch the ropes.

The tuners are Fender vintage-like.

I do not know what brand of microphones equip this guitar.

The nicest I've ever played maple-neck round.
Access to acute very easy, we have all the sounds of a good strat AND a good Telecaster (except the central position which gives the sound of the middle pickup and not that of the two microphones of TV).

The interface is excellent close to the reproach that the thickness of his body makes it heavier than many Fender.

I do not know the wood is actually the body, but the grain of the wood and crystal clear sound it is likely that it is ash.

Collector and player become rather casual, I would say that the more I play, the less I see the point of my Telecaster a crazy price, nor that of a classic strat.

The sounds are crystalline floydiens, country, bluesy, but not for the big rock.

I play in a Mesa Mini Rectifier or Marshall lamps.
Sounds delight me more.

I love all the sounds and biting guitars characteristic ash with maple neck.

For me (I repeat myself) it replaces the conventional Fender.

I use it for 2 months, I have over twenty guitars, what I like most about this guitar is its ability to store Fender in the closet, what I like least is weight ... but involved no doubt his sound.

The quality / price ratio is unbeatable!

Not to mention the emotional relationship, since I bought a great musician of the French scene

With experience, I would do this choice with his eyes closed.
Exceptional guitar, versatile in fenderien registry excellent violin and sounds envy.

And then there was a moment I will leave me impressed by the brand or place of manufacture of an instrument.

When I think his pickup sounds more "Telecaster" my Telecaster USA in 2000 brouzoufs ...