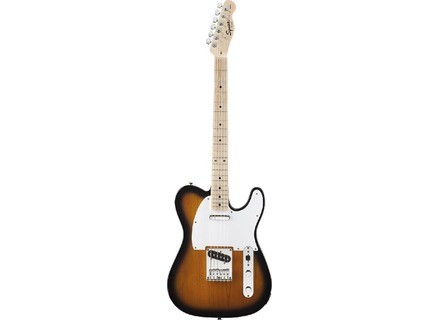 Affinity Tele, TLC-Shaped Guitar from Squier in the Telecaster series.

Squier Affinity Tele
5
The price was 180 US dollars , which is reasonable since it's issued by Fender . In terms of quality , you do get more than what you payed .

Well , the first thing that strikes you when you turn on the amp is the similarity on the sound. You can hear that Fender-quality ring when you first start playing. In terms of quality, this is a mean-old brick that doesn't like to be broken. I've dropped it on wooden floors, smashed it on tables, and all that is left is a few paint chips here and there ...

The guitar does look slightly cheap. The pots and the pickup selector looks like something from a scrapyard, but it works well, and that's what counts.
I not a particular fan of the tuners either. If you bend the top strings for the high notes, the strings seem to loosen itself, which is bad news if you're in the middle of your gig.

Hard and solid. That's all I can say.

Brilliant guitar. Who said it's for beginners? It's cheap, but it's not a piece of junk. To me, it's a respectful imitation of Fender where it deserves more credit than it currently has.
If you're looking for a Telecaster, this is the closest to the real thing.
Although it's only less than 200 bucks, atleast it's got the 'Fender' name on the headstock...

great price, its a good starter guitar but i have started to grow out of it now. the pickups give out a relatively good sound for two single coils occasionally tinny sound but an alright price.

After about two weeks of playing, the guitars bridge pickup broke. i took this to the shop aand they were going to charge me about $30 for a new pickup. i went home and unscrewed it and all there was was a loose wire. After this the input broke due to a very flimsy screw.
I have a Marshall MG 10 practice amp obviously not very loud, and even if you put this on the brigde pickup and use distortion over half way, the amp will screech. i wasnt very pleased with this.

the construction in my opinion is poor. the screw and the wire as well as minor drops that can take large chunks out of it.

i think that this is a good starter guitar but it would NO WAY suite an intermediate guitarist. there is not enough variety for what you can do with this guitar and it takes a good amp head to turn out a good tone.

Squier Affinity Tele
5
It was sitting on a rack at the local music store, I already have an old 78 USA Tele and was curious to hear what this was like. It was bought at Trevor Davis music in Leominster England for £149. I just started playing it and it sounded really good so I bought it!

It is a nicelightweight guitar with great sound, it is also nicely made and finished, it is ideal for songwriting with and just for playing, the action is also superb, making it an ideal first or learners guitar, the price is also good allowing a learner to get a good quality guitar if they are on a budget.

doesn't have strings through body like on my old Tele but that could be rectified with a retro fitted bridge. Some hardware might be worth upgrading if you so desire but the standard equipment is good enough.

In a word superb, it is a guitar that is probaly underestimated because of it's budget price tag.

I have refinished and repaired many big name guitars over the last 20 years as a hobby, with this knowledge, I think this is superb.

I wish when I started playing electric guitars that I had been able to get my hands on this one. I am astounded by the build quality and the playability in this superb guitar. It is just another example of the great guitars now coming out of Asia. I love this guitar!

Just about everything. This is a special model that was created for the 2003 Summer season so it has the butterscotch finish with a black pickguard. The neck is maple and so is the fretboard(nice and fast). It comes with basic tuners that are nothing to write home about.

The only issues I've discovered so far are a tendency for a string to buzz every now and then, but that buzzing does not carry over to the amp. The tune of the guitar goes bad if I use my capo between the frets, but that is because I have a high tension capo. I've discovered if I clap almost directly on the fret, I can avoid going out of tune.

The construction is rather solid for it being a bottom-of-the-line guitar. It is not as heavy as a standard tele, but I find it heavy enough. It has a good feel.

This is an excellent guitar for the money. Great for beginners or those with limited funds. You really don't sacrifice sound for this great deal!

This review was originally published on http://www.musicgearreview.com
Did you find this review helpful?yesno
»
Read the 40 user reviews on the Squier Affinity Tele »

Listen to the 2 audio files about Squier Affinity Tele »