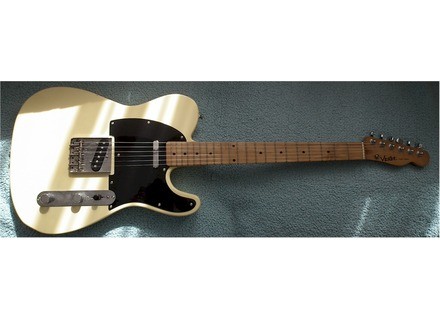 Vester Stage Telecaster
4
I don't pretend to have the ultimate truth so all info must be confirmed...However, currently, from my point of view, things are this way:
- Vester is a US brand from the '70s/'80s/'90s which had a good reputation, especially, for its (very?) good Fender and Ibanez copies...
- They were made in Korea or Japan
- The company closed in 1994, after Fender sued them considering that their copies were too similar to the originals...

Concerning this Telecaster Stage Series:
- The body is made of massive alder, in theory
- The neck is made of maple, in theory, too
- The bridge is Tele-type
- 2 single-coil pickups
- Volume and tone controls plus 3-way toggle switch.

Do note that Tele copies usually have a different headstock shape, but that isn't the case with this one. An important detail if, like me, you are somewhat of a purist in terms of aesthetics.
And Vester even went so far as to copy Fender's logo (which, partially, explains the lawsuit...).

The neck is very nice and fast.
The guitar is weighty, but I love it anyway.

It's not a shredder guitar (and I'm not one either), so access to the upper frets is average, in my opinion.

At first I was surprised because, as I mentioned above, the truss rod can't be accessed from the headstock, but rather from the body/neck junction.

Personally, after purchasing it, I had my luthier replace the tuners with a Gotoh set, among other things, which makes tuning more reliable than with the original ones.

Before I say anything else, I must say that this guitar is totally new to me.... Being used to a Gibson Les Paul with fat humbuckers to play punk-rock/rock'n'roll, I'm exploring new territories...

I kept the original neck pickup, which provides a very nice warm and round sound, typical Fender (I wonder if it hadn't been replaced before). I had a ball playing songs with clean sounds.
I mounted a Kent Armstrong pickup on the bridge and it's wonderful. It's twangy, with a good punch, but precise and it crunches really fast depending on the attack on the strings.

I alternate between a 90W Fender Transistor Deluxe (for clean sounds) and a 40W Marshall DSL40C tube amp (for crunch and distortion) to play The Gaslight Anthem, The Hives, The Clash, and even ZZ Top...

One last point: I can hear a buzzz when I plug it to the amp without playing it, but you only need to line the interior of the guitar with tin foil to reduce it considerably (that was a tip from my luthier).

I've been using it for two months..
For the record, I paid 49 euros at a secondhand store (it was on top of a shelf covered with dust and it had a couple of scratches) and with all upgrades it came to almost €200. So it's an excellent value for money!!

I love the Telecaster design, so I looked for a while for a Squier, a Mexican Fender, etc... But I can now tell you that this upgraded Vester clearly outclasses any Squier and some Mexican Fenders, which cost way more.
Specialized sellers with whom I have talked about it have confirmed that it is indeed a very good guitar.

I'm really happy and do not plan to part with it. If you ever run into a Vester, give it a try, it might be what you're looking for...
Did you find this review helpful?yesno
»

Vester Stage Telecaster
4
¤ 3-saddle Telecaster-type bridge
¤ I don't know the exact type of neck, but it's almost as slim as the one on my Ibanez GAX30, so very slim.
¤ Maple neck, maple fretboard, 21 frets
¤ Two single-coil Telecaster-type pickups
¤ One volume and one tone control, a 3-way switch (each pickup on its own and a mix of both at the center position)
¤ I have no idea of the year of manufacturing, but it surely isn't young, considering that the brand ceased to exist several years ago.

¤ Very pleasant neck! It's not lacquered, which makes it faster, I think. Good access to the upper frets, clearly better than on my Ibanez (the GAX30 is a double cutaway Les Paul, though). The only thing I don't like about the neck is that you can't access the truss rod from the headstock, you have to do it at the junction of the body and the neck, so you need to remove the pickguard and the neck pickup to reach it, which isn't very easy.
¤ I love the Tele shape, it doesn't bother me, nor its weight (I like rather heavy guitars), but it's quite heavy and fairly "square," which might bother some people..

¤ I love its sound! I wanted a single-coil guitar to practice and, in the end, I prefer it to my humbucker guitar... It lacks some power to play AC-DC or Guns 'n' Roses, but other than that, it sounds fine.
¤ I use a Peavey KB100 keyboard amp with a Zoom G2.1Nu multi-effects.
¤ It's great to play blues, not so much for rock or commercial music, but it can sound fairly good with the right settings. It surprised me most when I wanted to play some pop stuff: It's great to play things like Indochine, for example.
¤ It sounds really twangy, but you can get any sound you want with it, from clean to distortion, without any problems. You can always hear some noise, regardless of the sound you use. It's not particularly annoying, it's very weak, but it will eventually require a change of pickups.

¤ I've been using it for 3 weeks now. Before buying it, I tested a Squier Affinity Stratocaster from a friend of mine, and I didn't like it that much: It sounded too "smooth," the pickups too muddled and the guitar was too light. But it's a guitar that, brand new, costs the same as this one secondhand.
¤ I like best: The overdrive sound, which I think is good for anything: It's powerful and clear at the same time, something my Ibanez can't provide.
¤ I like least: The position of the selector! It's placed like on all Teles, but since it's very big, I have often hit it with my fingers when set to the neck position, which isn't very nice.
¤ I think it's a good value for money, even if I'm no Telecaster expert.
¤ With hindsight, if I had the same budget, I would surely buy it again, considering that I immediately loved it as soon as I started playing it.
Did you find this review helpful?yesno
»